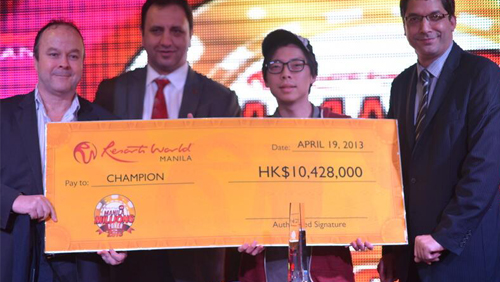 Joseph Cheong takes down the Manila Millions just days after finishing as runner-up to Philipp Gruissem at the WSOP-APAC $50,000 High Roller; and Switch Poker launch their new website

It’s true that Joseph Cheong has not yet found the magic formula needed to convert his World Series of Poker (WSOP) final tables into bracelets, but he has managed to find his way back to winning ways after taking down the Manila Millions for HK$10,428,000 (approx. $1,340,000).

It’s been a long time since Cheong has won an event (13th Oct 2010 to be exact) and he will be delighted to have captured this particular crown, after coming so close to his first WSOP bracelet after finishing second to Philipp Gruissem in the WSOP-APAC A$50,000 High Roller event just a few days ago.

$129,000 was a steep price to play for a seat in a poker game, but there were 18-players on hand to pay it. Resorts World Manila were expecting more, but there were four rebuys on hand to inflate the prize pool to HK$24,000,000 (approx. $3,100,000). Sam Trickett, Joseph Hachem, Philipp Gruissem, Andrew Robl, Nam Le, David Benefield and defending champion Allan Le all played in the event with Benefield, Tom Hall, Gruissem and Robl the quartet each contributing $260,000 for the cause.

With that win, Cheong takes his all-time live career earnings to over $8 million and will see him move closer to Marvin Rettenmaier at the top of the Global Poker Index (GPI) top 300 where he currently resides in fifth place.

When Switch Poker first burst onto the scene back in 2010 they were celebrated as the mobile gaming innovators, bringing real money mobile online poker to both iOS and Android devices. Innovation was then extended by becoming the only poker operator to integrate Bitcoin deposit/withdrawal methods alongside normal cash transactions through the likes of Neteller, Skrill and credit card options.

They are at it again with the release of a brand spanking new website and the launch of ‘Switch Poker Medals’ only their innovative wells have seemingly run dry as the medal attainment programme is no different to the medal system that Full Tilt Poker launched back in the day.

The medals are awarded to players as recognition for their achievements both on and off the virtual felt of Switch Poker. Medals can be awarded for liking Switch Poker on Facebook, Retweeting a Switch Poker tweet, playing in consecutive real money games and even writing an article on the Switch Poker blog.

Players have the option to display their bronze, silver and gold medals next to their playing avatar or hiding them from view.