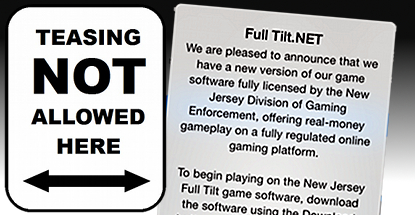 The hearts of online poker players were all-a-flutter Wednesday afternoon following messages that seemed to indicate that Amaya Gaming’s Full Tilt had been cleared to offer services in New Jersey’s regulated online gambling market. However, hopes were soon dashed after it turned out to be a digital cockup.

The confusion began when poker player Dennis Lopez (@DLO_Rican) tried logging on to Full Tilt’s free-play dot-net site on his iPhone. Lopez was presented with a splash screen indicating that Tilt’s software had been “fully licensed by the New Jersey Division of Gaming Enforcement, offering real-money gameplay on a fully regulated online gaming platform.” The notice went on to invite users to download said software and log-in with their current Full Tilt account details.

Lopez posted a screenshot of the message, which quickly circulated through the US online poker community. Sadly, Lopez found himself unable to download the advertised software and PokerStars spokesman Eric Hollreiser soon deflated hopes like so many New England footballs, saying the message was “an error” and that Amaya was investigating what had happened. (We’re looking at you, North Korea.)

Amaya has been anxiously awaiting a positive sign from New Jersey regulators as to if/when it might be allowed to take advantage of PokerStars’ nearly two-year-old online poker deal with Atlantic City’s Resorts Casino. Two weeks ago, state Sen. Ray Lesniak suggested Stars would be out of the starting blocks by March, but he offered few specifics as to how he’d arrived at this timeline.

Sportech CEO Ian Penrose told eGaming Review that the casino site was still awaiting regulatory approval but that things were progressing “really well.” Penrose believes there’s “definitely room for more brands” in New Jersey and SNG remains “very ambitious’ about its ability to carve out a “strong position” in the market.