According to a poll of four investment houses conducted by Business Daily, gaming revenues in Macau will likely decline 16.5% in January. 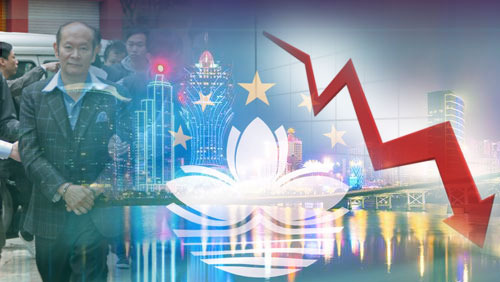 The estimates in the decrease of revenue by all four investment houses-HSBC, Daiwa, Wells Fargo and Stern Agee- range from 13% to 20%. The forecasted decline still has a considerable margin of error but if the market predictions are correct, Macau casinos will have their best month since September.

Wells Fargo, which gave an 18% forecast, said in a note to clients this week that daily gaming revenue during the second week of January was MOP743 million, 22% behind January’s first week (MOP950 million) and 1% down from December’s daily average.

Macau casino revenue fell 2.6% to 351 billion patacas ($44 billion) in 2014, after a record a 30.4% drop to 23.3 billion in December, the seventh straight month of decline. Last year is also the first annual decline since the special administrative region began releasing financial figures in 2002.

Sterne Agee says gaming revenue totaled MOP8.7 billion in the first 11 days of January, a drop of 13% from a year ago. Macau gaming operators recovered some ground in the stock market on January 13, with shares improving around 1.5% (except Melco Crown, which lost 1.2%).

This week saw the arrest of more than 100 people in Macau related to a prostitution ring, including Alan Ho, nephew of casino tycoon Stanley and other executives and will have to remain in prison while waiting for his trial, said Macau’s prosecution office.

Alan Ho and other senior executives of Hotel Lisboa (pictured) were arrested over the weekend for allegedly running a prostitution ring at the property.The police estimate those involved made more than MOP400 million (US$50 million) over the past two years.

Japanese finance firm Nomura said on Thursday that the arrest of Alan Ho will “not have a direct impact on revenue of SJM or other Macau casino operators”.

“The arrest of Alan Ho is just one example of cooperation between Macau police and Guangdong police, focusing on the crackdown of cross-border organised crimes not limited to illegal money transfer, offshore gambling, etc,” Nomura said. “Macau and Guangdong police action has become more intense since end-2014 ahead of President Xi’s visit to Macau.”