South Africa to give online gambling legislation another try 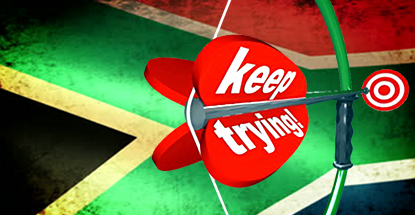 South Africa will take another stab at passing online gambling legislation in 2015, according to the author of its most recent legislative effort. Democratic Alliance shadow minister of trade and industry Geordin Hill-Lewis, who introduced his Remote Gambling Bill last year as a private member’s bill, says this time around he’s “offering government a possible solution, so I am confident that the Bill will succeed.”

PricewaterhouseCoopers analysts would beg to differ, having said in November said they “don’t see anything happening” on the online gambling front “for quite a period of time.” This, despite the country’s Gambling Review Commission having recommended updating the country’s online gambling legislation some four years ago. South Africa currently allows only sports betting to take place online while Hill-Lewis’ bill would expand the range of online betting options.

Hill-Lewis’s bill would make licensing the combined responsibility of the National Gambling Board and the country’s nine provinces. The Board would serve as an umbrella body for issuing gaming licenses but the provinces would be allowed to provide input into the process.

Even Hill-Lewis admits the Department of Trade and Industry has “not yet developed its own policy position, and, if anything, favored the prohibition of online gambling.” Regardless, Hill-Lewis intends to reintroduce his bill when Parliament reopens in February, after which he hopes it will be sent to the Portfolio Committee on Trade and Industry for debate. Hill-Lewis told ItWeb he hopes the Committee debate “will force government to engage properly around this argument.”

LAND-BASED OPERATORS ONLINE FEARS UNFOUNDED
Meanwhile, the Casino Association of South Africa (CASA) is waging a campaign to convince people that online gambling poses a threat to the country’s brick-and-mortar casinos. CASA CEO Themba Ngobese says even if only 5% of the country’s land-based revenue was diverted online, it would deprive the government of R110m (US $9.5m) in annual tax revenue. Casino revenue growth slowed to 0.6% last year after a 10% gain in 2012-13.

Ngobese claimed (without citing sources) that casinos in Europe had suffered a 20% drop in visitation due to the popularity of online gambling and a similar trend in South Africa would result in a “devastating” loss of tax revenue and casino jobs. This doesn’t jibe with numerous studies and the personal testimonies of casino owners that have found that online gambling complements, rather than cannibalizes, brick-and-mortar casino revenue.