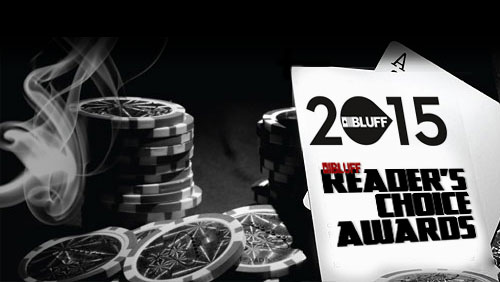 The 2015 BLUFF Readers Choice awards sees some familiar names making the headlines as the likes of Daniel Negreanu, Daniel Colman and Vanessa Selbst pick up awards.

With the BLUFF Player of the Year (POY) race out of the way, it was time for BLUFF H.Q to draw a line through 2014 by announcing the winners of the annual BLUFF Readers Choice Awards.

Mark Newhouse picked up the award for ‘Best on the Felt Story’ for his back-to-back World Series of Poker (WSOP) Main Event final table performances. He may have wanted to commit hara-kiri after repeating his ninth place finish of a year earlier, but what an amazing achievement it was. Victoria-Coren’s record breaking second European Poker Tour (EPT) victory came in second.

Moving off the felt and Amaya Gaming’s acquisition of PokerStars accrued 33% of the votes to finish ahead of the Borgata counterfeit chip scandal as the most interesting off the felt news story of the year.

Two more non-playing awards to cover – the WSOP broadcast team of Lon McEachern, Norman Chad, and Kara Scott edged out the EPT Live crew in the favorite broadcast crew award, and rising star Jason Somerville killed it in the favorite web based poker show category with 66% of votes.

Moving onto the players and a scent of predictability was in the air as 2014 BLUFF POY Dan Colman took the votes as the Breakout Performer of the year; and both Daniel Negreanu and Vanessa Selbst picked up the male and female performer of the year awards. It’s the third time Selbst has won the award, and Negreanu – despite his tough year on the 2+2 forums – has now won this award every single time it has been up for grabs.

The Aussie Millions $250,000 Challenge Final Table line-up of: Phil Ivey, Isaac Haxton, Mike McDonald, Daniel Negreanu, Fabian Quoss and Tom Dwan was deemed to be the best of the year, and American card room awards went to the Commerce, The Aria, The Borgata and the Seminole Hard Rock in Florida.