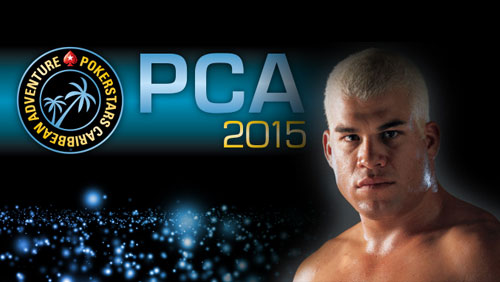 Ultimate Fighting Champion Hall of Famer, Tito Ortiz, is scheduled to appear in a special Q&A session at the PokerStars Caribbean Adventure, prior to starring in the Main Event.

There are few men that will strike fear into people’s hearts at the 2015 PokerStars Caribbean Adventure (PCA) but none more so than the Ultimate Fighting Champion (UFC) Hall of Famer Tito Ortiz.

The former UFC Light Heavyweight Champion will take his seat in the $10,000 Main Event courtesy of a victory earned at the PokerStars sponsored: Lucky for Lupus LA Celebrity Poker Tournament.

The event was hosted by Ton Braxton and featured the likes of Tia Carrere, Karina Smirnoff, Lou Diamond Phillips, Mekhi Phifer and Dan Bilzerian’s new buddy Verne Troyer. Nick Cannon picked up the Ace Award at a special ceremony with proceeds going towards the fight against the disabling autoimmune disease known as Lupus.

PokerStars will be squeezing the most out of the giant frame of Ortiz. On Wed 7 Jan 2015 he will be hosting a special Q&A session about the importance of fitness in poker. The action commences at 11am inside the Players Lounge, and questions can also be fired at him through Twitter using the hashtag #AskTito #PCA2015 @PokerStars_PCA.

The man mountain will also take part in Season 2 of The Shark Cage. Filming for the second series begins during the PCA. Griffin Benger won the inaugural event, and million-dollar freeroll, after beating another man mountain, Mike Tindall, in heads-up action just a few weeks ago.

Ortiz, who turns 40 later this month, made his debut in the Octagon back in May 1997 and he defeated Wanderlei Silva at UFC25 in Tokyo, two years later, to capture the Light Heavyweight Championships; a title he successfully defended five times before losing to Randy Couture in 2003. He left the sport in July 2012, but still holds the record for most all-time career appearances (27). He was inducted into the UFC Hall of Fame in 2012.