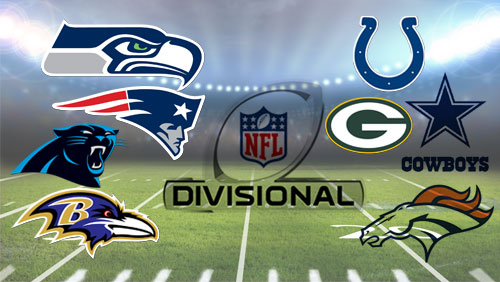 After a pretty eventful Wild Card weekend that saw the Carolina Panthers, Indianapolis Colts, Dallas Cowboys, and Baltimore Ravens all advance to the Divisional Round of the NFL playoffs, we’re down to the last eight teams that have a chance to win the Super Bowl this coming February. Not that people need to be reminded but this is where games become pretty hairy. Together with the aforementioned four, the teams that had bye weeks in the Wild Card round – the New England Patriots, Denver Broncos, Green Bay Packers, and Seattle Seahawks – will be putting their collective seasons on the line this coming weekend.

Naturally, these four games will over plenty of dialogue leading up to game time, none more important in this corner than the betting odds for each of the games. Somewhat surprisingly, three of these four games feature point spreads that are hovering around a touchdown spread. The other game isn’t any closer with the home team penciled in as double-digit favorites. Just goes to show you that despite the stakes involved, sportsbooks don’t think that any of these games will be close.

The game with the shortest odds has the Dallas Cowboys opening as 6.5-point road underdogs when they travel to Green Bay to face Aaron Rodgers and the Packers. Big D’s impressive come-from-behind win against the Detroit Lions showed that this isn’t the same bumbling and stumbling Cowboys team that we’ve loved to root against in the past few seasons. Whether it can slow down Rodgers and the high-powered Packers offense is another story. I don’t necessarily think this game will be close, but I do think that a lot of points will be scored, which would make an over play on the 53 O/U total seem like a good move.

If you’re not confident about what’s being offered in this game, you can opt for the two AFC Divisional round match-ups. The first of the two AFC division games starts with the Denver Broncos opening as -7 favorites against the Indianapolis Colts. Most books actually have this number squarely at 7 points and the hope is that action comes from both sides to prevent the difficult scenario of adding half-a-point on that number. The O/U total for this game sits at the same 53 number as the Cowboys-Packers game. This seems like a good over play, too, but there are questions on Peyton Manning’s health leading up to this game. Same goes for Andrew Luck’s receiving corp so I’m not as excited to place a bet on the totals for this game. As for the spread, I’ll probably wait to get that half-point. If the line moves up to -7.5 for the Broncos, a Colts underdog play looks promising. If it drops to -6.5 for Denver, a Broncos play could be in order.

Meanwhile, the other AFC division game will feature the Baltimore Ravens and the New England Patriots. Right now, the home team sits as -7 favorites  with the total opening at 49 points. Some books actually opened the spread at -7.5, but action on Baltimore prompted books to move it back up to -7. If there’s a game with a live underdog, this is it. The Ravens have played the Patriots tough in the past and it won’t be surprising if Baltimore even wins this game outright. Take note of that when there’s action on the spread. A bump up would make a Ravens pick interesting.

Last but certainly not least is the Carolina Panthers traveling to the Pacific Northwest to take on the defending champion Seattle Seahawks. Beating the ‘Hawks at their home stadium is a task far easier said than done. That could explain why books opened this game with Seattle laying a massive -11 points against a team that has also played the Seahawks tough in some of their more recent meetings. As expected, the total for this game is the lowest of the four division games. Some book opened it at a measly 40 points, but action on the over has bumped that number up to 41.5. Still, if you’re willing to bet on an offensive explosion, this is the time to buy stock on the over cashing in on this game.