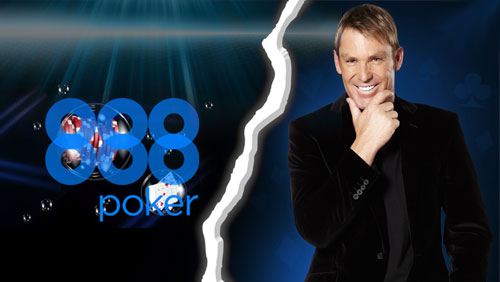 Australian cricket legend, Shane Warne, has parted ways with the online poker room 888Poker after six years with the Gibraltar based outfit.

Shane Warne has announced on his Twitter feed that he has left his long time sponsor 888Poker. Warnie joined 888Poker within 12-months of retiring from international cricket where he made a name for himself as one of the most exciting bowlers in the history of the sport.

Whilst the departure of a sponsored pro is not unusual in modern times (the sponsored pro is becoming rarer than a peck on the cheek between Daniel Negreanu and Annie Duke), it is odd to see a sports star leaving a brand. Warne’s departure is the third in the past 12-months, with JC Tran and Sam Holden also leaving. Warne gave no indication as to why the relationship ended, and there has been no official word from 888. Perhaps the continued conflict of interest between Warne’s role with 888 and Sportingbet may have had something to do with the split? No sooner had Warne announced his divorce from 888Poker, a new Sportingbet advert featuring Warne was released on social media showing the man who used to share a bed with Liz Hurley trying to eat a bowl of the world’s hottest curry. It didn’t end well.

Determining Warne’s success at 888Poker is a difficult one. 888 will not have hired him for his success on the felt, and that’s a good thing – Warne only earned $71k in the six-years that he represented the outfit. That said, they wouldn’t have kept hold of him for that long if he wasn’t putting bums on virtual seats.

Warne has indicated that he would like to continue playing on the professional poker tour circuit, but there is of yet no word on any potential poker sponsor, and I doubt given the current climate that you will see one.

FYI I still want to play on the pro poker tour & keep improving ! Really enjoyed the last 7 years with 888 but time to move on !!!!

Footnote: If you are American then cricket is a version of baseball; just as boring, and just as painful to watch.