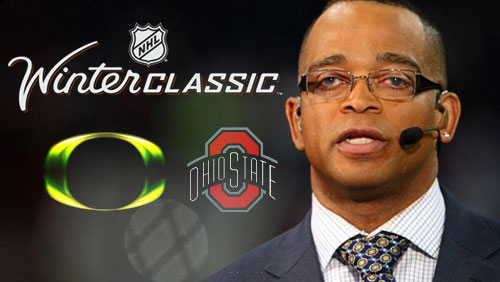 I’ll be the first to admit that the holiday season always screws up my sports schedule. Non-stop parties constantly leaves me in a daze, scrambling to see what happened in the sports world on this day and that. I also celebrated my birthday, or at least I tried to, given how exhausted I’d become from all the holiday revelry. Oh, and out-of-town visitors also arrived and we all know how these visits always seem to throw a monkey wrench on anybody’s schedule. Through it all, I did find time to get up-to-speed with some of the biggest happenings in sports, including an unlikely college football National Championship game, a pretty exciting Winter Classic and the unfortunate passing of an iconic sports anchor.

No. I didn’t watch Oregon put a pasting on Florida State and I also didn’t get to see Ohio State wax Alabama to set up a date for the national title on January 12. Since both games happened on January 1, I was probably slumped over my couch, grabbing for the nearest ice bag to help drive away that massive New Year’s Eve hangover. At least that’s what I remember. I do remember checking up on both games and  while I was a little surprised to see Oregon and Ohio State beating their much-ballyhooed opponents to set up this title game, I didn’t really think much of it until I realized that this could be the first college title football game in a long time where we dedicate a majority of the hype to the actual teams playing in the game.

So, no Jameis Winston coverage and there sure as hell won’t be any of those “Roll Tide!” bellyaches to accompany it in the lead-up to the game. That’s a good thing because we get to focus our attention on two of the best programs in college football. No talk of this or that, or who did this and who said that. This one should be all about football between two teams that deserve to be playing in the National Championship game at Cowboys Stadium.

A quick peek at the betting odds and it shows a pretty surprising picture: Oregon is a -7 favorite against Ohio State. That’s taking into account the fact that when you look at these guys side-by-side, you’re looking at two teams that aren’t too different from one another. Public betting seems to be heavy on the side of the Ducks, too, but I expect those backing the Buckeyes to come in heavy as game day approaches.

Either way, this game should have plenty of fireworks, the kind that sets up very well in one of the biggest stages in football.

Winter Classic lives up to the hype…again

I’ve always been a fan of the NHL’s Winter Classic. I’ve argued that it’s one of the most incredible sports games to watch on a high-definition television. The game, despite being played by two teams that have no outright animosity towards each other, still lived up to the billing, and then some. There certainly wasn’t a shortage of star power. The Chicago Blackhawks paraded their plethora of superstars and the Washington Capitals countered with its Russian brute, Alex Ovechkin.

Granted, Ovechkin hasn’t had the best of seasons by his incredibly high standards, but he was all over the place at the game, scoring one of the Caps’ three goals and assisting in the game-winner 13 seconds from overtime.

I’d be remiss if I didn’t find time to talk about the passing of ESPN anchor Stuart Scott. I was probably around 10 years old when I first saw an episode of SportsCenter and I was immediately struck by this man who seemed to describe NBA highlights in a manner you’d do with a friend in front of a water cooler the next day.

I’m foggy on the memory because it was 21 years ago, but I also remembered the same guy starring in a lot of those early SportsCenter commercials. He was funny. He was charming. But most of all, he seemed like someone people like me could relate to. There was something natural about him, exuding professionalism and balancing it with an unmistakable swag that made him a larger-than-life presence on my SportsCenter-binging days. That dude was Stuart Scott.

It’s heartbreaking to see him lose his battle to cancer at the age of 49 but the man certainly didn’t make it easy for the disease to take him away. Scott was a fighter and he proved as much to everyone who kept tabs on how he fought cancer to the bitter end.