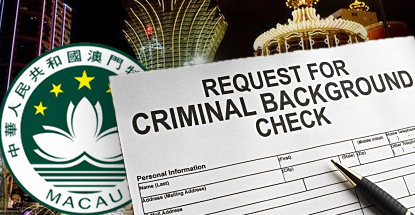 Macau casino junket operators have been told to step up their scrutiny of the agents who steer high rollers to the junkets’ VIP gaming rooms. On Monday, Macau Business Daily reported that Macau’s Gaming Inspection and Coordination Bureau (DICJ) had issued a formal notice to junkets on Dec. 19 saying they would be required to file documentation verifying that their agents have no criminal records.

A source told MBD that the edict, which is set to take effect Jan. 1, could have a major impact on new VIP clients, “especially those from mainland China.” These clients would be required “to have an account [in Macau] to issue commissions [to promoters] or withdraw gaming capital, and they can only rely on local gaming promoters.”

DICJ spokesperson Wendy Wong told Bloomberg that the ‘new’ rule was in fact an existing one and that the notice issued to junkets was merely “reminding” them of their obligations under the law. The reminder was issued just as China’s president Xi Jinping paid a visit to Macau, during which he warned Macau to beef up its regulation and supervision of the casino industry.

New or not, the extra emphasis on toeing the line will likely further depress Macau’s already struggling VIP gaming sector. Macau traditionally earns roughly two-thirds of its overall revenue from VIPs and their thinning ranks have largely been responsible for Macau’s six-month gaming revenue decline.

On Monday, the Lusa news agency projected revenue in the final month of 2014 will be between 30% and 32% lower than the same month last year. That would be the largest decline this year, easily eclipsing the 23.2% fall recorded in October. Wells Fargo is predicting a slightly less terrible decline between 27% and 29%. Either way, December’s decline will put 2014’s annual revenue in negative territory, marking the first annual decline since Stanley Ho’s monopoly ended in 2002.