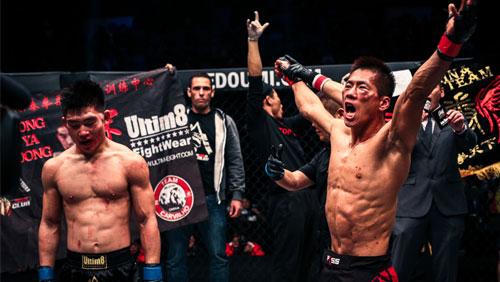 19 December 2014 – Beijing, China: Asia’s largest mixed martial arts organization with a 90% market share, ONE Fighting Championship™ (ONE FC), kicked off ONE FC: DYNASTY OF CHAMPIONS with an amazing show at the Gymnasium of National Olympic Sports Centre in Beijing, China. In partnership with IMC Live, ONE FC treated fans to a night of world-class mixed martial arts action. In a much awaited clash of bantamweights, Ji Xian dealt Song Ya Dong the first loss of his young career, winning by unanimous decision in an absolute barn-burner.

Visit the official ONE FC: DYNASTY OF CHAMPIONS photo gallery by clicking here.

In the main event of the evening, veteran mixed martial artist Ji Xian scored a unanimous decision victory over young prospect Song Ya Dong in a memorable striking contest. Ji caught Song with a big punch in the first round, but the younger fighter quickly regained his bearings. Ji and Song viciously exchanged strikes, with the more experienced Ji landing the cleaner blows. In the second round, both combatants continued to pour on the power punches with Song being the busier fighter. In the third, the more experienced Ji began to pull away, dominating Song over the final five minutes of the bout.

In a highly-anticipated matchup, Adrian Pang routed tough lightweight contender Vincent Latoel, winning by submission in round three. Pang, with the edge in power, slugged Latoel with heavy hands whenever he got in close as Latoel opted to fight from a distance. On the ground, Pang scored on a few short elbows from Latoel’s guard. In the second round, Latoel was more effective at fighting from the outside while Pang looked for the takedown. Pang then dropped Latoel with a monstrous right hook but Latoel recovered well. In the third, Pang countered a takedown by pulling a Guillotine Choke, forcing Latoel to tap out.

In the Beijing Featherweight Tournament Final, two explosive striking specialists in Li Kai Wen and Wang Ya Wei went to battle to the delight of a packed crowd. Both fighters traded explosive strikes at the center of the cage in the first round, swapping blows in back-and-forth action. Li however showcased his superior striking acumen, getting the better of the exchanges with his quickness and power. In the second round, Li continued to control the bout with his accurate strikes, earning the victory by unanimous decision and the Beijing Featherweight Tournament Championship trophy.

In the Beijing Flyweight Tournament Final, Li Wei Bin and Wang Wei put on an epic war of attrition for fans in attendance. Li opened up the fight with a well-timed right hand that knocked Wang back, followed by a quick flurry of strikes. Wang was able to counter with a right hook that dropped Li to show fans he was still in it. The second round however saw Li establish his dominance in the striking department, gutting out a solid unanimous decision victory to become the Beijing Flyweight Tournament Champion.

Michal Pasternak overcame a left knee injury to defeat Rafael Silva by decision. The tall and lanky Pasternak used his brute strength to control the action on the ground, battering Silva with a barrage of punches and elbows from mount. In the second round, Silva tried to score with a takedown but wound up in the same position on his back with the larger Pasternak on top. Silva had a couple of solid submission attempts but Pasternak stuck to his gameplan. In the third round, Pasternak willed his way to the end of the fight, grinding out the unanimous decision victory.

In a clash of fierce competitors, Ariel Sexton announced his return to the lightweight mix with an impressive submission victory over Anvar Alizhanov. Alizhanov dropped Sexton with a right hand in the opening moments but on the ground, Sexton quickly showed his grappling brilliance, locking in a body triangle and dazzling with an array of submission attempts. The end sequence came when Sexton transitioned beautifully into a reverse triangle from mount and forced Alizhanov to tap out from an armlock.

In the second Beijing Featherweight Tournament Semi-Final bout, Wang Ya Wei showcased a relentless fighting style, defeating opponent Li Gen by Technical Knockout. Wang went straight to work on Li, with a clear advantage in strength from the sound of the first bell. In half guard, Wang unleashed a barrage of strikes on Li which featured downward fists and elbows, causing referee Yuji Shimada to call a halt to the bout.

Li Kai Wen impressed with a first round knockout victory over He Nan Nan in the first Beijing Featherweight Tournament Semi-Final bout. He came out with a furious attack on Li, driving his opponent back up against the cage but after another tenacious exchange, Li connected with a left hook that dropped He. A few more downward strikes by Li coerced referee Olivier Coste to stop the contest.

In the second Beijing Flyweight Semi-Final bout of the evening, Wang Wei completely dominated Liu Xu with his grinding style, winning by unanimous decision. Wang drove successfully into a takedown from the get-go and kept Liu glued to the mat for the majority of the first round. From top position, Wang worked on Liu with sharp elbows and punishing forearms. The second round saw much of the same, with Wang completely controlling the fight on the ground to claim the victory.

Li Wei Bin and Hao Yi Jie kicked off the action for ONE FC: DYNASTY OF CHAMPIONS. In an exciting battle in the first Beijing Flyweight Tournament Semi-Final bout, Hao started off with a quick Guillotine Choke attempt but Li was able to reverse his fortune, gaining mount. From the top, Li worked into ground and pound, transitioning into an armbar that forced Hao to tap out in the first round.

Official results for ONE FC: DYNASTY OF CHAMPIONS