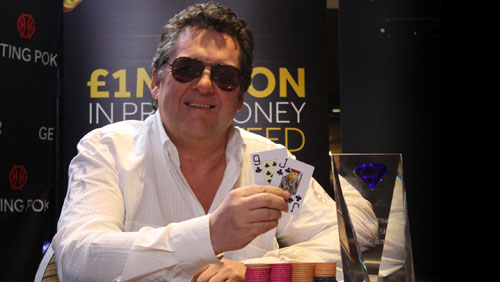 Mark Evans is the 2014 Genting Poker Series (GPS) Grand Final champion after topping a final table without a turkey in sight. Evans defeated a field of 255 entrants to capture his third five-figure score of 2014, after deep runs in the Wynn Fall Classic in Las Vegas, and the Grosvenor United Kingdom & Ireland (GUKPT) Poker Tour in Leeds.

It was a three-day event, and the final day of action saw 14 players take to the felt. Ben Jackson, Richard Milner, Charlie Denton and Richard Hawes all falling by the wayside until Brandon Sheil got embroiled in a spot of bother with the starting day chip leader Dahe Liu. Sheil seeing his pocket kings dismantled by the pocket fives of the chip leader after flopping a set. Sheil was out in 10th and the GPS Grand Final had a final table worth talking about.

Liu started the final table as the dominant chip leader, with over 2.2m in chips, and the eventual winner Evans would start as one of the short stacks. Poker has a way of turning your life upside down and that’s how Liu will be feeling after his tournament ended in third place. He shoved from the button holding J9, and was called by Evans in the small blind, holding K8 – king high good enough for the win.

That exit handed Evans a 5.9m v 2m chip lead over Langley, and it would be all-over when Langley flopped top pair on J93, holding J7, and Evans was sat holding J9 for top two pair. Neither the turn nor river helped the former Mega Poker Series champion and Evans was declared the winner.

Other well-respected pros to cash were Ben Vinson (25th) and Kevin Allen (19th). It’s been a great few weeks for Vinson, in particular, with a 13th place finish at the World Poker Tour (WPT) UK Main Event, and a third place finish in the GUKPT Grand Final in London.