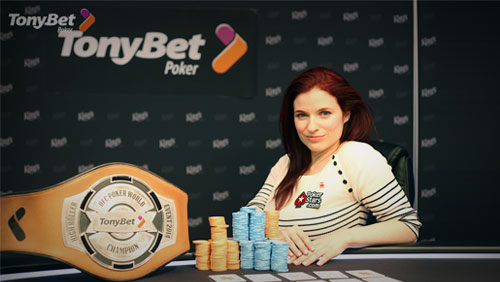 Jennifer Shahade is a Chess Grandmaster, successful author, and now an Open Face Chinese Poker (OFC) world champion, after winning the €10,000 High Roller event at the King’s Casino in Prague.

The event attracted 23 entrants, and created a total prize pool of €218,500. It was the biggest prize pool in the short history of live OFC tournament poker, and it attracted some of the biggest stars in the game.

The newest member of the World Poker Tour (WPT) Alpha8 fraternity, Jason Mercier, was in the house, High Roller grinder Sorel Mizzi joined him, as did the amazing Alex Kostritsyn. The action, which was predominantly three-handed, was also streamed live over the Internet.

“This is a really great result for Jen, poker and the development of OFC,” a Tonybet representative said after the event. “This is our first live event, and it’s already the biggest OFC tournament held. We have to hold our hands up and say we didn’t expect the number of entries we got so we are off to fantasyland! The event was bigger than any WSOP or EPT Open Face Chinese event, and the players just loved it and there was a real buzz about the room. The viewers loved it as well, tens of thousands of OFC fans watched and interacted with the live broadcast and their responses were positive. What was more encouraging is that we saw plenty of people who were learning the game for the first time!

The one day event paid four places and Shahade (the only female to enter the event) had to contend with an all out Russian assault as Ilia Boulychev, Oakov Onvchin, and Maksim Panyak piled on the pressure with only a quartet remaining in the chase for the first prize of €100,000.

“I loved it and had a great time. I almost busted several times, and I wasn’t so happy with how I played in the beginning, but then as I got more tired, I got to play better. I have played regular Open Face Chinese in a live tournament before, but never Pineapple. It was fun, I thought it was great and hope there will be more tournaments like this,” Shahade said.

The victory is the biggest win of Shahade’s poker career trumping the $43,300 she earned for her 31st place finish at the PokerStars Caribbean Adventure at the start of the year.

The TonyBet OFC Poker World Championships continues with the €1,000 Main Event already underway at the King’s Casino. Day 2 will be streamed live on the Tonybet Poker live blog.