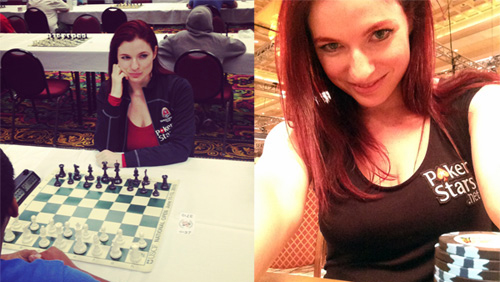 Lee Davy sits down with the poker player, chess Grandmaster and writer Jennifer Shahade to talk about her chess career, the inclusion of chess at the United Kingdom & Ireland Poker Tour event in the Isle of Man, and much more.

Jennifer Shahade is a poker player, chess Grandmaster and writer.

In short, she is a pretty smart woman.

With chess forming part of the festivities at the upcoming UKIPT, on the Isle of Man and the first-ever $1m Guaranteed Chess tournament soon to be held in Las Vegas, I thought it was a great time to invite Shahade onto the show.

Both your father and your brother were exceptional chess players. As you grew up did you feel like you had to play chess, or did you love the game?

“When I started out I was intimidated because my father and my brother were so good and I wasn’t catching on so quickly. So I left it to one side for several years because of that. People are surprised about that. They believe that if you don’t grasp it immediately then you will never be good. I was a counter story to that. I picked it up – was pretty bad for a while – and then in High School, I came back to it, was much more motivated and became a Master pretty quickly with some hard work.”

Is it tougher to learn chess the older you get?

“Oh definitely, it’s good if you learn earlier. I think the fact I learned when I was younger – even though I wasn’t that good – really helped. It’s the same when you learn languages I think. Being exposed at a younger age helps a lot. It also depends what your goals are? To become one of the very best in the world, I think everything in your life has to go pretty much perfectly.”

How competitive were you and your brother?

“He was always a lot better than me because I got a late start. He was a Master when I wasn’t even picking up chess so I was somewhat competitive but I would have been more so had we started at the same age.”

Can you remember the first time you beat your father or brother?

“It wasn’t really that remarkable. I love my brother dearly. We are each others number one fans, best friends and really support each other in what we do. My brother is super competitive, and very dedicated to the game. He started the US Chess League, which is supported by PokerStars. We both come at the game from different psychological angles, and I guess the game that stands out for me is the time I beat Greg in a Blitz game. The game was played in front of a pretty big audience and I was really proud to beat him that day.”

What is one of your biggest achievements in chess?

“I am a very creative person and so one of my biggest achievements was writing my book: Chess Bitch.”

What is Chess Bitch a book about?

“It’s a book about the history of women in chess and how chess is a different experience for women because we are the significant minority in the world. I went to different countries and spoke to people about chess in those countries, and added my own experiences. It was really challenging to write it, and I felt I did a good job of it. I am really proud of it.”

There is always a lot written about how difficult it is for a woman to break into poker and gain respect. What is it like in chess for women?

“There are a ton of similarities between chess and poker when it comes to getting into the game for women. There are so few women in both fields I find that women get a lot of opportunities and attention before they reach a real high level and that can be kind of disconcerting. Especially, for women who don’t like a lot of attention.”

Aggression and risk taking is a very important part of a successful poker players make up – is this the same in chess?

“Aggression is important, but in chess there is less raw aggression and more focus and attention. Being able to focus on one thing and exert all your energy on it. Also it’s important to be clear with yourself on what your weaknesses are.”

How difficult is chess to market during the video game age?

“I think chess is thriving right now. In some ways you can compare it with a video game because you can play different variations of chess. The kids like a game called ‘bullet chess’ where it’s all play, play, play. Low attention span trend type games, and then you can switch and play something a lot deeper.”

How excited are you to hear that the UKIPT are going to be hosting a hybrid chess/poker event?

“I am so excited about this. There will be a Blitz game played in the hybrid event where you will accrue chips to play in the Turbo poker tournament. I think it’s fantastic. I am the Mindsports Ambassador for PokerStars and I have been wanting an event like this to happen for a long time. It will be a blast. Chess is becoming a lot more popular and it’s image and stature is rising. There are so many poker players that love chess, and vice versa, I think you will see a lot more collaborations in the future.”

What can chess learn from poker and vice versa?

“Chess can learn from poker that it’s very important to be a bit more glamorous. Chess has struggled without the TV coverage and sponsorship. Players get involved with the game because they love it, but we need to bring it up to the next level. We need some people playing chess who want to be famous. That’s why so many people play poker tournaments instead of cash games. It’s all about that winner’s photo. This is why the $1m guaranteed chess tournament in Vegas is so important.

“One thing that chess has that poker doesn’t have is kids can play it. On one hand it’s less accessible because it takes longer to learn, but on another hand, it’s more accessible to a wider audience.”

I would love to have poker taught in school, do you agree?

“I totally agree. Poker is a great learning tool for basic financial skills, which nobody’s teaching people in school. I think chess is wonderful for kids and taught in the schools, but I also think it would be great to introduce poker, but there is the sticky question of: ‘are you promoting gambling?’ It’s a tough one.”