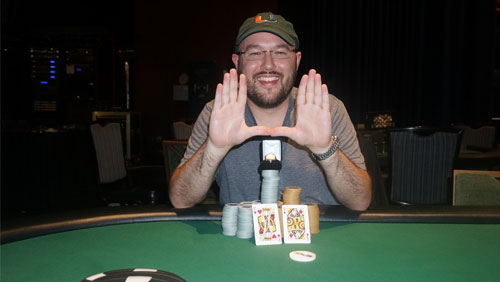 What a fantastic year it’s been for Scott Davies.

Those two victories have been life changing for Davies, who has since visited 21 different countries to play, and promote, the game of poker. Since his victory in Australia, Davies has also taken $46,881 by winning a side event at the Asia Pacific Poker Tour (APPT) in The City of Dreams, Macau.

His latest victory came in the WSOPC series at Harrah’s Cherokee. Davies won the gold ring in Event #8: $365 No-Limit Hold’em (NLHE). He defeated Eric Thompson in heads-up action to take the $24,335 first prize. Thompson was in fine form himself after recently securing a $103,228 score for a $1k victory at the Choctaw Fall Poker Series where he beat 495 players.

“It’s pretty cool because I grinded the Circuit in 2012. I actually broke the single season record for most cashes with 18, and fifth place was my best finish that whole year. It was super frustrating getting deep in so many events and not winning one,” Davies told the WSOP. “It’s cool to jump back on the Circuit and close a deal that I have never closed.”

Chad Reynolds took the lead in the Casino Championship after finishing fifth. It was his second final table in two days after finishing runner-up to Jim Kier in Event #9. The Main Event will be played out over the weekend.

After cashing 20 different times on the WSOP Circuit, Aaron Frei, has finally ended one at the top of the pile with victory in Event #8 of the WSOPC at Harrah’s Cherokee.

Frei, who started Day 2 as the chip leader, did it the hard way after squaring off against WSOP bracelet winners Greg Raymer, and Leif Force, at the final table.

“Force at least didn’t have a ton of chips to start. He kind of did start running it up, but Raymer came in and was just bulldozing everybody, so that was definitely the biggest competition.” Frei told the WSOP after his win.

It’s the second successive season that Frei has come away from the circuit with a smile on his face. In 2013 he won the Casino Championships at Harrah’s Tunica.