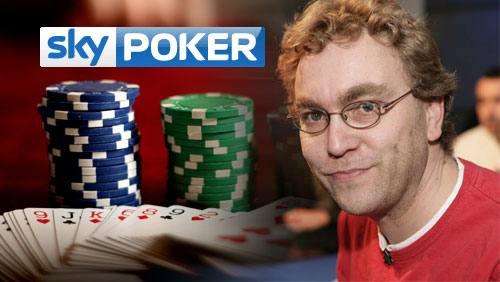 Lee Davy sits down to talk with Neil Channing about his new relationship with Sky Poker and what the future holds for the pair.

Earlier in the year, when Neil Channing called time on his Black Belt Poker experience, you didn’t expect to see him affiliated with an online poker outfit any time soon. Nine-months later Channing has agreed to join one as an ambassador.

The former Irish Open Champion has agreed to join Julian Thew as an ambassador for Sky Poker. The new deal will see Channing making regular appearances on the Sky Poker TV channel, playing online on the Sky poker site, and also representing the brand at live events.

It’s also good news for blog readers, as the 2013 British Poker Award winner, for Best British Blogger, has vowed to get his quill out to write a yarn or two for the Sky Poker site.

I managed to catch up with Channing to have a few words with him about his new partnership, and this is what he had to say.

How did this opportunity arise?

“They had been thinking about adding to their team for a while, and I’d always been “off-limits” due to owning a poker site. Literally, the day Black Belt Poker closed I got a call, but I was just not really in the mood to even think about poker just then. Like a nervous young suitor they pursued me and I shyly kept them at arms length. We did a bit of holding hands at the Sky UKPC. Now I wear the patch we are allowed to snog.”

Matthew Pitt called you a ‘British Legend’. How does that make you feel?

I guess we are going to see more of you on the live scene from now on. What’s the plan?

“The plan was always to play more poker next year. I’m not really intending to play any EPT events. I don’t really see how they offer any value to any players and I have not enjoyed them for many years. Too much rake and no fun plus large travel costs are not for me.

“I will 100% be proudly wearing the colors at the WSOP next year, I’ll of course play the two Sky UKPC events at DTD…I played both of them last year and they were really good fun…I’m hoping they’ll have three or four.

“I’m going to wear the colors twice next week. Firstly, at Aspers in a streamed cash game that Bluff Europe are doing with Unibet, and then at the GUKPT main event at the Vic which I’m really looking forward to. I will mostly focus on live events in London, or at DTD. I’m not planning to play 100 a year, maybe six or seven.”

What do you have to do to become a success at Sky?

“Breathe. Seriously, I’m active in social media, I’m recognizable to poker people, I will post on their forum, write blogs, turn up at events and actually speak to people like a real human being always used to when playing poker.”

Many online poker rooms are firing. Sky decided to hire…why do you think that is?

“We are a good fit for each other. I’ll probably be around poker for the next few years…not that likely to move to Thailand, or get a job as an accountant, or go to Uni. I have a decent profile; I’ve actually won a few things, I like doing the TV shows, I blog. They could do with more people like me, and if there were any they’d probably sign more I guess.”