Ji Xian to face Song Ya Dong at ONE FC: Dynasty of Champions 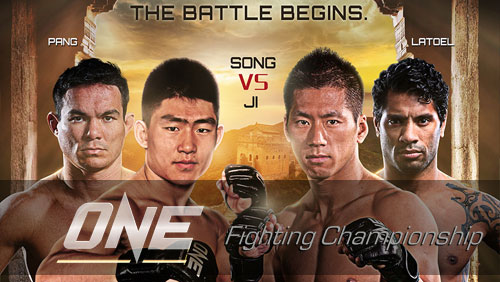 21 November 2014 – Beijing, China: Asia’s largest mixed martial arts organization with a 90% market share, ONE Fighting Championship™ (ONE FC), has announced that ONE FC: DYNASTY OF CHAMPIONS is set to take place at the The Gymnasium of National Olympic Sports Centre in Beijing on 19 December. Top Chinese bantamweights will collide as former pan pacific champion Ji Xian faces the undefeated Song Ya Dong. Top lightweight contenders Vincent Latoel and Adrian Pang will clash in the co-main event. Also, a four-man, one-night featherweight tournament will be held and a champion will be crowned on the same night. The featherweights competing for the honor will be He Nan Nan, Li Gen, Li Kai Wen and Wang Ya Wei.

CEO of ONE Fighting Championship™, Victor Cui, stated, “ONE FC is set to become the first major mixed martial arts organization to make inroads into mainland China. We will launch a 10-city tour with a huge event in Beijing as a sign of things to come! China is a hotbed for mixed martial arts talent and I will not be surprised to see a ONE FC World Champion from China in the near future. The path to glory begins at ONE FC: DYNASTY OF CHAMPIONS! Get ready for a night of world-class mixed martial arts action as ONE FC is live from China for the first time!”

Ji “The Executioner” Xian has made a reputation for himself as one of the top mixed martial artists in Asia. With a background in Sanda, Ji proved that he is one to watch out for in the MMA scene when he went undefeated in his first eight fights, winning a title in another promotion. He is now set to test himself against the best mixed martial artists in his division and will begin his quest for the ONE FC championship with a bout against Song Ya Dong.

Song Ya Dong is one of the brightest prospects in the world of MMA. He has already won four professional mixed martial arts bouts before his 20th birthday and is one of the most highly touted mixed martial artists to ever emerge from China. He will face his biggest test to date in compatriot Ji Xian. Song is best known for his takedowns and will make good use of them against fellow grappler Ji Xian.

Adrian Pang is one of the top lightweights in the world. A veteran of 30 fights, Pang was previously a champion in another promotion and will now make his ONE FC debut with his sights set on capturing the prestigious ONE FC Lightweight World Championship.

In his first four bouts with the promotion, Vincent Latoel has established himself as one of the most exciting mixed martial artists on the ONE FC roster. Latoel began his career as a Dutch kickboxer but has developed an all-action style that has proven to excite audiences. Latoel will be a tough litmus test for Pang as both fighters look to prove they are ready to contend for the title.

He Nan Nan is a former bodybuilder who has become a well-rounded mixed martial artist. He is proficient in wrestling and boasts devastating knockout power in both his fists. Originally from Shanxi Province, he now fights out of Beijing.

Li Kai Wen is a freestyle wrestler who currently trains at Tianjin alongside other top Chinese mixed martial artists. He will face He Nan Nan in the Beijing Featherweight Tournament semi-finals. Li Kai Wen has already faced He Nan Nan once in a grappling bout and defeated him via submission. He Nan Nan is determined to claim victory in the mixed martial arts realm while Li is out to prove he is the better fighter.

Li Gen is a Sanda fighter from Beijing. He is also highly adept at Brazilian Jiu-Jitsu, and his team has been crowned the best in Brazilian Jiu-Jitsu for the past two years. One of the top prospects to come out of the country, Li Gen wants to stake his claim as the best featherweight in the country by overcoming all competition.

Wang Ya Wei is a wrestler originally from Hubei province. Considered one of the top wrestlers in the country, he then moved to Thailand where he trained in Muay Thai for an extended period of time. He has since competed in regional competitions, winning his last bout by a nifty suplex and strikes sequence. Li Gen will face Wang Ya Wei in the semi-final bracket of the competition.

Fans around Asia can catch all the action live on FOX Sports 2 and on Star Sports in China. Check your local listings. Also, fans from around the world can witness the action online via live streaming at http://www.onefc.com/livestream. The event will be available for purchase at just US$9.99.

About IMC Live Group China
IMC Live Group China is a multi-disciplined concert and event management company focused on creating lasting top quality experiences for artistes, corporations and fans. Headquartered in Chengdu, China with global offices in Singapore, Malaysia and Taiwan, IMC Live Group China has successfully carved a niche for themselves since their establishment in 2007. Past projects include mandarin acts such as Mayday, Stefanie Sun, Jay Chou, Faye Wong, Eason Chan and Sodagreen as well as English acts such as The Cranberries, Suede, Avril Lavigne and Elton John, in cities such as Hong Kong, Toronto, Vancouver, Bangkok, Taipei, Singapore, Kuala Lumpur and parts of the Western China region.