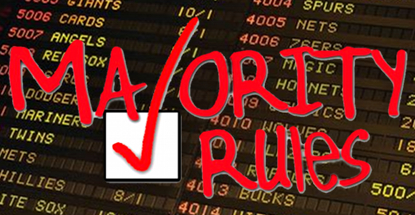 A majority of Americans would welcome the opportunity to place a legal sports wager, according to a new Seton Hall University poll. The telephone survey, which queried 847 individuals between Nov. 16-19, found 55% of respondents supported the idea of redrawing the legal map to allow single-game sports betting, which is currently restricted to Nevada under the federal PASPA sports betting prohibition. Just one-third of those surveyed were interested in maintaining the status quo.

Nearly three-quarters (72%) agreed with the statement that sports betting was a popular form of entertainment, a position stated in the recent New York Times op-ed by National Basketball Association commissioner Adam Silver. The poll showed betting support highest among younger demographics, with 47% of those between the ages of 18 and 29 years old in favor of betting but just 26% of those over 60 years old. Men were found to be stronger overall supporters (44%) of betting than women (25%).

The poll also undercut the sports leagues’ mantra that legal sports bets would result in fans developing a perception that games were subject to fixing. The poll showed 43% of respondents already believe that athletes “occasionally or often” influence the outcome of games due to gambling interests, a number that rises to 47% when it comes to the games’ referees and umpires. Poll director Rick Gentile called these numbers “shockingly high” and suggested the leagues “can’t take this lightly.”

Thursday saw the latest court hearings between the state of New Jersey and the sports leagues and the US Department of Justice opposing the state’s desire to offer legal sports bets at Atlantic City casinos and state racetracks. District Court Judge Michael Shipp indicated he would render his verdict sometime late on Friday. Virtually no one expects New Jersey to prevail but most observers believe the state’s chances will be much better when the inevitable appeal reaches the Third Circuit Court sometime next spring.