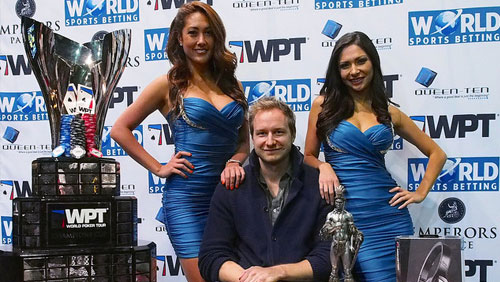 It was a case of third time lucky for Dylan Wilkerson. After coming as close as you can get to claiming a World Poker Tour (WPT) title, on no less than two occasions this year, he finally joined the WPT Champions Club with victory in South Africa.

What a run it has been for the American.

Wilkerson came into the final table second in chips, and had all the experience. With the exception of Aaron Overton – who finished fourth at the WPT Borgata Championships – it was a fairly inexperienced final table.

Darryn Lipman was first to fall when his [Ac] [2s] ran into the pocket jacks of Chris Convery; Diane Crous then eliminated Aaron Overton when Overton jammed holding [Tc] [9c] and was called by big slick; and Convery was the next to go when he made a move holding [Th] [8h] and was picked apart by Wilkerson’s, [Qc] [9c].

Wilkerson marched into the heads-up encounter with Barnard after eliminating Crous. It was a tough exit for the South African after the flop put her well ahead of the American. Her ace-king spiking a second king on the flop, against Wilkerson’s pocket nines, only to see a series of running diamonds giving Wilkerson the flush.

The heads-up action was fairly even, before the inevitable all-in an call. Barnard held [Kh] [Qc], but Wilkerson had him dominated with [Ah] [Qh]. Five cards later and Wilkerson was getting that unfamiliar feeling.

He was a champion.

The WPT is also in full swing in Nottingham as WPT UK is currently taking place at the Dusk till Dawn Casino and Poker room.