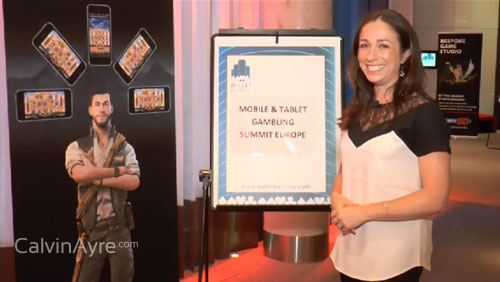 The two day Mobile & Tablet Gambling Summit Europe kicked off this morning at the Hilton Tower Bridge in London, attracting close to 200 delegates from start to finish.

This summit is the one time per year when mobile gambling professionals can get together for a series of sessions led by industry experts, split up by ample networking opportunities.  The topics covered during the summit are of upmost importance to our industry, a reflection on how mobile strategy has become- and will continue to be- front and center for every operator.

Lidzen began the discussion by highlighting the bottom line- is the mobile product user-friendly? He then talked on the challenges of managing a multi-brand solution as Betsson runs a number of separately branded websites servicing different markets in Europe.  “Focus on every key touch point of the customer journey, all the way from login to withdrawal”, Lidzen advised.

Widmark added that in mobile its more important to pre-populate the registration process as mobile customers have less patience to fill in data than they would on desktop.  Lidzen agreed and said everything about mobile is “simplicity, speed and transparency”.  Customers want to place a bet and to place it fast.

“Personlization is the holy grail for us”, Grimes added.  Paddy Power’s goal is to identify the areas on their site where personalization is relevant and achieve it in a manageable way in terms of technology and cost.  An example of where personalization would be relevant is the homepage: “If 80% of people find what they want on our homepage, that’s a huge win”, Grimes said.

The subject of player communication was discussed, with Lidzen confirming his team is “investing heavily” in communication with the customer in the right place at the right time.  Grimes added that Paddy Power uses data to engage players in the way they want to be engaged- for example if they are trail blazers and like trying out new products, send them an email or SMS inviting them to try a new product when its launched.

As the session came to an end, Shortt summed things up nicely when she said, “Start thinking about the customer and not the product if you want a seamless experience”.

Read was full of useful information from a social gaming side and contributed a lot to the panel discussion.  “All the innovation is happening in social.  The best games are in social in my mind at the moment”, Read said.  At the same time, he added that the social gaming industry is only three to four years old and the industry is still learning- everything is a constant experiment, he said.

According to Read, an area for improvement with social would be to ditch the clutter on the screens- social companies keep adding and adding features and he thinks this is confusing for players.  “Social is going to have to figure out how to make the experience a bit easier for the arriving player”, he said.

Along the same vein, he advised operators to build a game for mobile from scratch as opposed to moving a game from desktop to mobile.  Trying to cram a massive desktop product into a tiny screen is just too much information and you’ll end up with a clunky user-interface, he said.

Some other interesting points uncovered by Read include that tablet monetization is worth five to ten times more than mobile, at least when it comes to social.  Much of this is due to more on-screen real estate and the fact customers are playing social games while they are on the couch and watching TV as opposed to on the train- the tablet is a clearly a better suited device for this type of behavior.

In terms of satisfying the player, Read suggested studying a success such as Candy Crush where 40% of their players are “pay to play”. “Try to get underneath what it feels like to play this game”, he said.  Find out what excites the player- the gold star vs. red star, competing against friends, making a new level and so on.

When it comes to mobile poker, Longley pointed out liquidity is less important than it is for desktop.  “Find out what the players want and direct them to the appropriate table”, he said.

All panelists agreed players want to be “talked to” rather than “talked at” and this mindset should be at the crux of every social media strategy. Paddy Power was mentioned as a company that stands out above the rest with their social media efforts, at least from a sportsbook point of view.

Once management jumped on board, Seif started using data and relevant events to tailor messages and reduce wastage.  Her team specifically targets 18-34 year old males, researching the blogs and websites they are most interested in, paying for direct messages, using Twitter as a commentary channel for live events- really anything that gets people talking about the brand so they will ultimately visit Coral’s website or go to one of their shops- “that’s our main goal”, she said.

Kotopoulos referred to social marketing as “an art of engaging” and proclaimed images and short videos absolutely are the future, putting social platforms such as Vine, Pinterest and Instagram on the map.