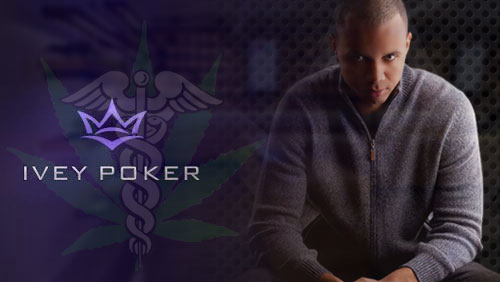 Ivey Poker has closed it’s cyber doors whilst a new lick of paint is applied, and the great man himself is revealed as one of 26 people/entities that were approved by Nevada city officials for a registration certificate to open up a medical marijuana store.

If PokerStars have to trim the sponsored pro fat, in order to reduce their wage bill, then how does Ivey Poker manage? After all, they seem to have a roster of sponsored pros that makes PokerStars seem positively Kate Moss.

Christian Harder has the answer.

It seems the multitude of people wearing Ivey Poker baseball caps and hoodies, have been working their butts off for nothing.

Well it’s time to chill out and what better way to do so that to have a chug on a big fat spliff.

Ivey Poker customers have received word from H.Q that the site will close down whilst it undergoes a lick of paint. If you are not a member of the site, then this is the e-mail that people recently received.

Since we launched our game here at Ivey Poker we’ve learned quite a few things…first and foremost that a dedicated and loyal community is essential. So to our loyal players, we felt we needed to communicate to you about some of the changes you’ll be seeing over the coming months. We plan on suspending the current game this Saturday, October 25th. Though that may sound ominous – it’s actually just the first step in our evolution as we prepare to launch an even bigger and better gaming experience for you all in 2015. We do appreciate all you have done for us here at Ivey Poker; it has been a joy and a learning experience for all of us…and one that we hope will continue as we grow and evolve! Stay tuned for more – the best is yet to come!

The recent lashings that PokerStars have been receiving include the question: “who can take over their position as the #1 card room in the world?”

Perhaps, Ivey Poker are ready to take on that role, and I think their boss has the perfect antidote for all the personal vitriol, hate and angst that is currently being fired in the general direction of the Isle of Man.

Ivey is one of 26 people/entities that have successfully navigated their way through the choppy waters of the Nevadan medical marijuana establishment regulations.

According to the Department of Health and Human Services Nevada Division of Public and Behavioral Health (DPBH) website, they have received 519 applications to open up medical marijuana facilities in the state, and the narrowing down process has started in earnest.

According to the Las Vegas Journal, city council members sifted through 50 potential medical marijuana business operators, last week, and only 26 got through the first stage of the application process, and amongst those  having their application rubber-stamped was Phil Ivey.

Perhaps, when the new Ivey Poker room re-opens there will be a new rule that players can only play after smoking some of his product. He will then introduce rake increases and currency exchange margins, and nobody will give a shit because they will either be out of it, or too busy finding something to eat.