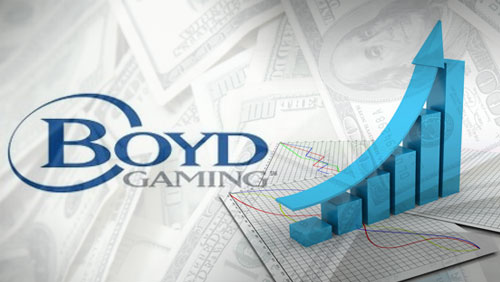 Boyd Gaming Group announce a 5.5% Q3 rise in Adjusted EBITDA to $163.9m, as The Borgata benefits from casino closures in Atlantic City and a nice juicy tax settlement.

Speaking on the Boyd Gaming Group earnings call, CEO, Keith Smith said “The third quarter was a solid quarter for our company”  as he announced a much improved Q3 financial performance compared to the fall in revenue it experienced in the previous quarter.

Shares in the company rose by 3.47%, on the New York Stock Exchange, after the company announced the improved performance, and great inroads that it had made with its debt reduction plans.

Smith told the call that the good results were the product of “actions taken to remove costs from the business and improve operating efficiency,” and he was also very proud of the work they had done to reduce their debt load.

$70m in debt was paid off, in the quarter, and that takes their total debt reduction down to $165m, for the year, and Smith believes they are right on course to hit their annual goal of $200m by the end of 2014.

Another big reason for Smith to be wearing a grin the size of the joker was an $8.1m tax settlement with the city of Atlantic City; although he was quick to point out that even without that little gift, earnings still increased by 4.7% as slot machine and hotel revenue increased.

Net revenues were $141.2m, an increase of 1% year-on-year, with adjusted EBITDA rising 6.5% to $28.1m. It was the sixth upswing in the past seven quarters. Smith confirmed that the growth was down to their non-gaming business.

“That’s where we’re seeing the pick-up in the business, you know, game revenue is flattish.” Said Smith.

Net revenues were $209.9m ($6.1m from online gaming), an increase of 4.9% year-on-year, with adjusted EBITDA rising 22.1% to $56.9m. The biggest benefit came from the $8.1m property tax settlement, but Smith was also keen to point out that the hotel, casino & spa, had benefitted from the recent closures of The Showboat, Revel, and Trump Plaza. The Borgata had increased its share of the Atlantic City gambling market by 24%.

Boyd Gaming Group now manage 22 properties across eight states, serving 15 different markets, and the company expects to generate between $576m and $586m in Adjusted EBITDA by the end of the financial year.