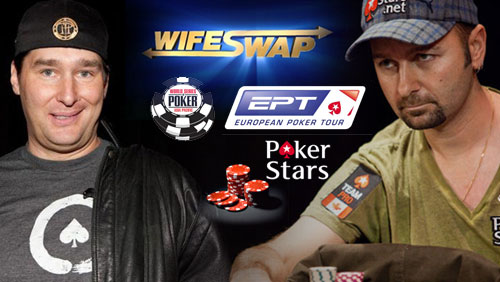 Another week passes into the annals of time, and just in case you couldn’t be bothered to read up on a single piece of poker news, Lee Davy comes to the rescue with his mandatory weekly round-up including: the big winners from The European Poker Tour in London and World Poker Tour Asia Pacific in Melbourne, Daniel Negreanu’s rant at the professional grinders at PokerStars; Phil Hellmuth keen on swapping his wife; UK affiliate reveals poker players drink too much; and the ‘Mad One’ leaves partypoker.

It’s been a big week on the live tournament front with simultaneous action taking place in London (European Poker Tour) and Melbourne (World Poker Tour Asia Pacific). Not exactly what I would call ‘working in unison’ but hopefully Alex Dreyfus will be able to start addressing this issue at the forthcoming Global Poker Conference.

Plenty of winners, and even more losers, but the names occupying more headlines than most are Andrew Chen, Sebastian Pauli, Mike Leah, Scott Davies, and George Danzer.

The chip leader going into the final day of action was the young British pro Jack Salter, who is having the year of his life, after finishing runner-up at the EPT Grand Final in Monte Carlo, and also winning a preliminary event at the Aussie Millions.

Salter would take that stack all the way to heads-up, where he would square off against the American Scott Davies, and once again the same result would befall Salter as he would have to make do with the role of bridesmaid as Davies won his first major title.

Salter is not the only player to be having an exceptional 2014.

The Canadian, Mike Leah, was coming off his first-ever seven figure score, after finishing runner-up to Dan Colman in the $10m Guaranteed Seminole Hard Rock Poker Open Main Event in Florida, and he has added a WSOP gold bracelet to his haul after victory in the WSOP-APAC High Roller.

George Danzer is the 2014 WSOP Player of the Year

There was a third name that shone brightly in Australia this week, and that was George Danzer. The German superstar overcame the American Brandon Shack-Harris in a nail biting run up to the end of the 2014 WSOP Player of the Year (POY) race.

It’s the second successive year that poker fans have been subjected to incredible POY excitement after Daniel Negreanu pipped Matt Ashton to the post to become the first-ever two-time WSOP POY in 2013.

Danzer had to win his third WSOP bracelet to overcome Shack-Harris who fought valiantly to the bitter end.

We will jump from one German superstar to another one waiting in the wings.

Sebastian Pauli has announced himself on the world scene after defeating an exceptional final table in the EPT London Main Event. Pauli had to overcome former champions Jake Cody (EPT6 Deauville) and Kevin MacPhee (EPT6 Berlin) in order to capture the title, and it was MacPhee who pushed him the hardest, finishing in the runner-up berth.

Pauli banked close to half a million pounds for his victory.

The EPT London High Roller event went the way of Andrew Chen. The well-respected, and well-liked, pro finally bagged himself a major EPT title after coming so close on so many occasions.

Final table appearances at EPT Main Events in Prague (2008), Monte Carlo (2010), and Berlin (2012), saw third, fifth, and second place finishes respectively, until he was able to edge out Fadi Kamar in heads-up action to take the £394,200 first-prize.

A surprise omission from the EPT London field was their main draw Daniel Negreanu. The Team PokerStars front man was allowed to travel to Australia to pursue his WSOP POY dreams, and came away empty handed, after failing to cash in a single event.

The winners interview hole was filled by several attacks. The first one aimed, rather surprisingly, at the online grinders at his PokerStars home, and the second one at a London judge.

After the PokerStars Spin & Go lottery style poker game generated 7.5m games within the first fortnight of its release, one particularly disgruntled online grinder vented his frustration on 2+2 that the new games were going to severely affect the nature of the ecosystem on Stars, after cash traffic appeared to nose dive during the launch.

That wasn’t an opinion shared by Negreanu who said, “Do you know what kills games and destroys the poker ecosystem above and beyond all the things mentioned? Winning players. Yup, you guys lol. The winning players as a whole win a lot more money than the company makes each and every year. Yet oddly, they still offer VIP programs to the very people who are essentially killing the games”.

Now that’s what I call a verbal tirade of Keyser Soze proportions.

The members of the Supernova Elite weren’t the only people getting a verbal bashing from Kid Poker this week. The Judge in the Crockford’s v Ivey ‘edge sorting’ case also came under fire.

Leaping to the defense of his good buddy Phil Ivey, Negreanu said that the London High Court Judge had ‘****ed him in the ass.”

Let’s hope there isn’t a vine video of that particular incident.

One man who has kept his Phil Ivey powder dry is Phil Hellmuth. Not so much as a peep from the great man over the Crockford’s case this week, but that’s because he has more pressing matters on his mind.

The man who many believe to be poker’s ‘top draw’ has been approached by the ABC TV channel to star in the reality TV show ‘Wife Swap’. It would be a fantastic thing for the growth of poker if Hellmuth were to say yes, and by all accounts he is well up for it, but the same cannot be said for his wife Katherine.

After 25-years of marriage it seems she is more than happy with the company of the Poker Brat after refusing to bow down to any Hellmuth pressure to star in the show.

“Have an offer to be on ABC television show ‘Wife Swap’, but wife won’t do it!” Tweeted Hellmuth.

Online Poker Players Drink Too Much

Perhaps, one of the reasons that Hellmuth’s wife isn’t too fussed about swapping her husband for a fortnight, is because he hasn’t been home that much anyway?

Hellmuth has been living it up in Australia, at the WSOP-APAC, where he has been spotted boozing with the likes of Daniel Negreanu, Antonio Esfandiari, and cricket legend Shane Warne.

It seems he is in exulted company as one UK affiliate revealed details of a study this week that showed online poker players to be overweight and drinking too much alcohol.

Jackpot.co.uk polled 2,131 active British gamblers to find out how fit they really were, and the news was not good for the sedentary lifestyle of the gambling fraternity.

Poker players were found to have the second lowest BMI (Body Mass Index) of 25, and they were also found to be the most likely group of online gamblers to drink excessively.

One man who has a penchant for a drink or fifty is the partypoker sponsored pro ‘Mad’ Marvin Rettenmaier. This week he saw the first two words of that title erased after his contract came up for renewal – and it wasn’t.

“We just knew it was time to part ways,” said partypoker PR man Warren Lush. “Although I have to say he has been great for us.”

With over $3m in earnings amassed since he started wearing the partypoker patch one assumes he is not going to run out of Grey Goose anytime soon.