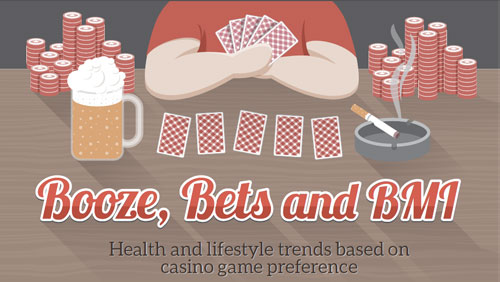 A survey of 2,000 gamblers has found that British casino game players as a group are no less healthy than the rest of the population, with an average Body Mass index (BMI) of 27; the same as the UK national average. However, the survey found that average BMIs, health and lifestyle choices such as smoking, exercise and drinking varied dramatically depending on the games they play.

The survey by Jackpot.co.uk found that slots players are the least healthy. They take less exercise and have an average BMI of 31, pushing them into the category of obese, which is linked to reduced life expectancy and an increased chance of developing illnesses such as Type 2 diabetes.

Sam Marsden, editor of Jackpot.co.uk, said: “There’s an undeniable link connecting passive games like slots and video poker to unhealthy, sedentary lifestyles. On the other hand, games that require concentration, strategy and some physical stamina like poker and blackjack seem to fare much better in the health stakes. It seems it’s less a case of ‘you are what you eat’ and more ‘you are what you play’.”

Roulette, blackjack, video poker and craps/dice players are not far behind slots players, each having BMI levels higher than the national average.

However, poker, baccarat and pai gow players, have an average BMI of 25 or under – well within the normal range recommended by the World Health Organisation.

Whilst drinking levels might be reasonably high among poker players, they are very exercise conscious, with 58 per cent engaging in physical activity for at least 30 minutes, five times a week. For slots players the figure was just 27 per cent meeting this government recommended target.

Overall slots players drink the most, with 24.1 per cent drinking over the recommended weekly limit. Although on this measure, poker players are not far behind on 23 per cent.  Female slots players were the biggest drinking subgroup, closely followed by male poker players.

Professor Anthony Barnett, University of Birmingham and Heart of England NHS Foundation Trust, commented: “The biggest driver for the worldwide epidemic of Type 2 Diabetes is overweight/obesity coupled with a sedentary lifestyle. In the UK, obesity rates have quadrupled in a single generation. Any change in behaviour that encourages more physical activity and leads to a reduction in BMI has to be a positive thing.”

The most common platform on which to play casino games was the desktop computer at 65 per cent, with just over 20 per cent playing on mobiles and tablets and only 14 per cent going to actual casinos. However, desktop use was linked to higher levels of obesity, drinking and smoking. It is thought that, as the use of mobile devices continues to increase, health levels could improve among gamblers as a group.

58 per cent of the respondents were male and 42 per cent were female.  A total of 2,131 gamblers were surveyed.

To View the Main Report: