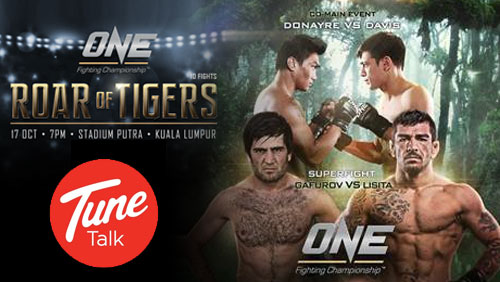 3 October 2014 – Kuala Lumpur: Asia’s largest mixed martial arts organization with a 90% market share, ONE Fighting Championship™ (ONE FC), powered by Tune Talk, has finalized the fight card for ONE FC: ROAR OF TIGERS. The heavily-anticipated event is set to take place at the iconic Stadium Putra in Kuala Lumpur on 17 October. Two bouts have been added as Muay Thai champions Saiful Merican and Dejdamrong Sor Amnuaysirichoke are set to face each other in flyweight action. Iran’s Taekwondo champion Barbod also returns to action against Egyptian boxing champion Hisham Hiba. The card is now complete with a main event clash of two of the greatest featherweights in the world, Marat Gafurov and Rob Lisita.

Tickets for ONE FC: ROAR OF TIGERS, presented by Tune Talk, are on sale now at www.AirAsiaRedTix.com. Ticket categories begin with the full Red Carpet and cageside experience for VVIPs at RM388 followed by VIP RM278, Gold RM168, Silver RM108 and Bronze RM58. A 10% discount for Gold, Silver and Bronze categories are available until 30 September. Prices include ticketing fee.

CEO of ONE Fighting Championship™ Victor Cui stated, “After months of anticipation, ONE FC is set to return to the iconic Stadium Putra with a night to remember! We have put together a fight card featuring some of the best mixed martial artists from all over the world. Fans in Malaysia and those watching all over the world will be treated to a night of world class mixed martial arts action that will leave them on the edge of their seats!”

Dejdamrong Sor Amnuaysirichoke has an impressive Muay Thai record of 282-65, and is a 3x Lumpinee World Champion. Now an instructor at Evolve MMA, he has trained extensively in all aspects of mixed martial arts in anticipation of this bout. Amnuaysirichoke showcased his newfound grappling skills when he submitted Ali Yakuub in his previous bout, extending his undefeated streak in ONE FC to two wins.

Saiful Merican is one of the top Muay Thai practitioners in Malaysia. He has more than 100 professional Muay Thai fights and possesses ferocious kicks that have knocked out many opponents. Nicknamed “The Vampire” by fans for his fast and deadly style, he will face a fellow Muay Thai expert who is arguably his toughest opponent to date, Dejdamrong Sor Amnuaysirichoke.

Iran’s Barbod is a former Taekwondo coach who transitioned into Muay Thai and eventually mixed martial arts. He has travelled the globe extensively, spending time in South Korea and has now settled into a head coaching role in Malaysia. A deadly striker with extremely fast hands, he handily defeated his last opponent with an emphatic slam finish.

Hisham Hiba is a two-time Egyptian national boxing champion who has been competing in combat sports since he was 12. A ferocious puncher with power in both hands, Hiba will be making his ONE FC debut at ONE FC: ROAR OF TIGERS as he attempts to become the first Egyptian to notch a victory in Asia’s largest mixed martial arts organization.

Fans around Asia can catch all the action live on FOX 2. Check your local listings. Also, fans from around the world can witness the action online via live streaming at www.onefc.com/livestream. The event will be available for purchase at just US$9.99.

In addition, TV9 also recently signed a deal to continue its partnership with ONE FC as its official media partner in Malaysia. TV9 is one of the four Free-To-Air (FTA) television stations under Malaysia’s leading media conglomerate, Media Prima Berhad and currently a strong No. 2 most watched TV in Malaysia after TV3.

With a 90%+ market share in Asia, ONE Fighting Championship is Asia’s largest Mixed Martial Arts (MMA) organization.  Headquartered in Singapore, the world’s most exciting mixed martial arts organization hosts the best Asian mixed martial artists and world champions, all signed to exclusive contracts, on the largest media broadcast in Asia. ONE Fighting Championship™ has partnered with FOX and STAR Sports for an unprecedented 10-year cable television deal with a coverage that spans 70+ countries across the world.

Tune Talk is the fastest-growing Mobile Virtual Network Operator (MVNO) in Asia, officially launching commercial services in Malaysia in 2009. Our target is to provide super low rates and exciting incentives to the market. Our prepaid service offers voice, SMS, data and BlackBerry packages that meet the demands for a simple, value-for-money product with easy accessibility and a wide distribution reach. As a member of the Tune Group of companies, we have the advantage of providing a completely unique lifestyle service with offers by Tune Money, Tune Hotels, Tune Insurance, BIG Loyalty Programme and AirAsia. For more information, please visit www.tunetalk.com.

About Tune Group of Companies