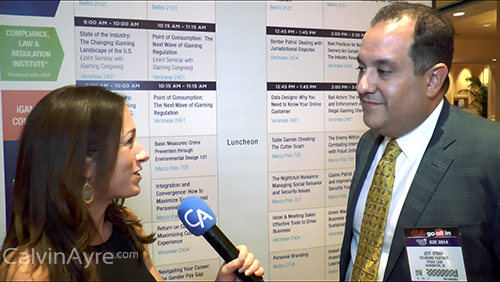 Becky Liggero talks to Jeff Ifrah from Ifrah Law about the latest development of Sports Betting in New Jersey and his opinion about Chris Christie’s decision.

Becky Liggero: What are the chances, in your opinion, of shift lifting the injunction?

Jeff Ifrah: Well I think if you apply the proper legal standard, I think he should lift the injunction. I think that New Jersey has done what DOJ and associate general said it needed to do, which was to repeal the sports betting provision as it applies to sports betting at New Jersey casino and racetracks. Now I think  the leagues of comebacks today as I understand in their own brief they said, ‘Wait a minute. New Jersey hasn’t lifted and completely deregulated the provision.’ Meaning, they won’t be happy until sports betting is permitted in New Jersey. Their argument is, you can’t limit sports betting to just racetracks and casinos coz then you’re actually regulating it.  And you need to deregulate it in order to be compliant with PASPA.

Becky Liggero: What do you think the leagues comeback with to get the sports betting to be regulated the way they want in New Jersey?

Jeff Ifrah: Well, they know that New Jersey is never gonna deregulate sports betting. That would be mayhem. Basically, it’ll be allowed to anyone in any street corner to accept any bet in any sports betting event and obviously there has to be some form of common regulation. For example, you don’t wanna have cheating; you don’t wanna have gambling addiction. These ae all basic things that the state needs to regulate.  And the leagues are basically saying, ‘no that’s too much regulation’ and the reason they’re making that argument is for a very silly reason and selfish reason and competitive reason and it’s because they want to keep sports betting out in New Jersey.

Becky Liggero: We’ve heard though, that the NBA for example, they’ve said sports betting is coming. Why won’t they embrace sports betting? I don’t understand why they just wouldn’t.

Becky Liggero: What is behind Christie’s decision to flip-flop on the matter? What is your opinion on the real reason why?

Jeff Ifrah: I think the answer is Atlantic City is in trouble, and I think he needed to deliver new value to Atlantic City. I think the announcement of 3-4 casinos closing in Atlantic City, 40% of workforce in Atlantic City being off. He has to come up with great idea and this idea happened to be there, happened to be available, and he ran with it and his attorney general ran with it. He says of course, it was just coincidence and timing. I don’t really believe in coincidences. Anyone in Atlantic City has known for 7-8 years that the casino in Atlantic City is not doing very well. And you can ask the same question as to why online gaming wasn’t introduce earlier. Certainly, it could have help some of those casinos that have closed. They may still be open today if online gaming has passed earlier. In terms of why he did not simply allow or sign Lesniak’s bill into law or why he did not just allow to go into law without Veto. I think you could argue that it may be a partly politics coz obviously Lesniak to be democrat and Christie is not. And maybe Christie wants to deliver the success to the voters of the New Jersey himself and certainly a possibility.