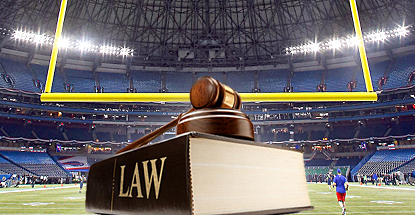 Earlier this month, Gov. Chris Christie issued a directive authorizing his state’s casinos and tracks to proceed with their betting plans on the grounds that Shipp’s 2013 injunction had invalidated only portions of the state’s original betting legislation. In beating back that 2012 legislation, the leagues had suggested there was nothing in the federal PASPA sports betting prohibition that prevented states from repealing state-level anti-betting laws. Christie’s new argument was that the 2012 legislation had ‘implicitly’ repealed those state laws – at least, in how they affected tracks and casinos – and Christie asked Shipp to confirm this view.

The leagues’ reply wastes no time in asking Shipp to end this farce, tossing out words like ‘specious,’ ‘questionable,’ ‘improper’ and ‘astounding.’ The leagues call Christie a hypocrite for taking the position that the 2012 legislation text that told tracks and casinos they “may operate a sports pool” didn’t amount to officially authorizing said activity.

The leagues also attacked the notion that not explicitly authorizing, regulating or licensing sports betting operators meant the state wouldn’t be providing direct oversight of betting activity. The leagues point out that tracks and casinos are subject to strict oversight and the state was inextricably committed to regulating every facet of their behavior.

WHO OWNS WHAT NOW?
The leagues’ attorneys did make one major gaffe, however, by arguing that wagering should especially not be permitted at either the Monmouth Park or Meadowlands racetracks. Monmouth’s operators have been most vocal about adding sports betting to their wagering palette, going as far as to target Oct. 24 as the day the track plans to start accepting wagers.

The leagues argue that PASPA specifically prohibits a state from operating a sports wagering service and that the New Jersey Sports and Exposition Authority “owns and manages” both tracks, But as first noted by NorthJersey.com’s John Brennan, while the state owns the ground on which tracks stand, the tracks’ operations are run by private companies.

LESNIAK TO THE RESCUE
From the start, state Sen. Ray Lesniak had suggested Christie’s argument would be better served if the state were to explicitly repeal its laws against betting at tracks and casinos. Lesniak had vowed to introduce a bill to do just that, but held off after the leagues were granted a one-week delay in their filing deadline. Lesniak now says he’ll introduce his new bill on Tuesday, which will allow Christie to more emphatically reply to the leagues’ brief. Christie has until Oct. 10 to craft his response and Shipp is expected to announce his decision a week later (17).