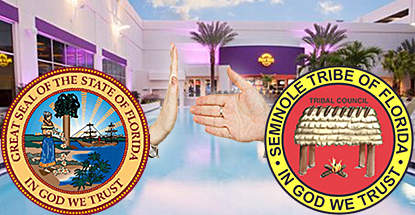 Florida’s Seminole Indian tribe was willing to guarantee the state government payment of $2b over seven years for the exclusive right to offer roulette, craps and other table games at the tribe’s casinos. The tribe’s negotiations with Gov. Rick Scott over a new tribal gaming compact collapsed this spring after the legislative clock ran out before a deal could be struck. Documents obtained by the Associated Press indicate that the deal the two sides were attempting to reach would have been the largest of its type ever reached between a tribe and a state government.

In 2010, the Seminoles inked a compact with then-Gov. Charlie Crist that allowed them to operate slots at their seven casinos and gave them a monopoly on blackjack and baccarat games. In return, the tribe guaranteed the state roughly $1b in revenue over five years. The monopoly portion of the compact expires in July 2015 and various stakeholders are pressing for dramatic revisions to the state’s gambling environment, including the possibility of non-tribal resort-casino development in the Miami area.

Operators like Las Vegas Sands and Genting have been very vocal in seeking to win a casino concession in Broward and Miami-Dade counties. Other forces, including social conservatives in the state legislature and tourism-dependent firms like Walt Disney Co., have been equally vocal about preventing any expansion of the state’s gaming options. Further complicating matters is this November’s election, in which Crist is seeking to oust Scott and regain the governor’s office.

The new deal Scott was negotiating would have been more lucrative than Crist’s and some documents suggested the deal would be worth as much as $15b over 30 years. In addition to allowing the Seminoles to build a new casino in the Fort Pierce area, the deal envisioned a new seven-year monopoly on certain table games, suggesting that Scott – who met with Sands boss Sheldon Adelson just weeks after his 2010 election and has since received significant political donations from Sands – has grown cold on the idea of loosening the Seminoles’ stranglehold on the state’s casino gaming industry.

Scott’s spokesman told the AP that this spring’s scuttling of the gaming legislation meant the details in the compact negotiation documents were essentially meaningless. New compact negotiations were on hold until after the November election, after which whomever emerges triumphant will return to the bargaining table and the laborious process of herding cats will once again commence in earnest.