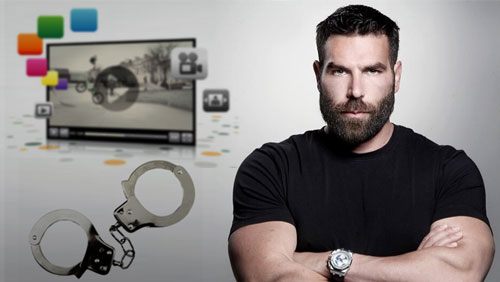 Millionaire playboy Dan Bilzerian sends his worried fans into a frenzied fit, after releasing a video being arrested by police.

“It was a fun ride while it lasted. I might be going away for a while.”

Those were the words that underscored a Dan Bilzerian tweet containing a video of him being arrested by local police. The last time I looked, the video shared on his Facebook page, had 4,398,156 views, 159,368 likes, 12,349 comments and 4,535 shares.

It was a fun ride while it lasted, I might be going away for a while http://t.co/8ZFSNd9goC

Bilzerian could tweet a video of him reading a book and it would go viral. His 947,000 Twitter followers, and 4.7m Instagram followers, can rest easy. The video was an elaborate stunt.

Come on you boys didn’t think I’d let those bastards arrest me did you… #CantKeepAGoodManDown http://t.co/UFFSHqVBlV

So why would Bilzerian hire a bunch of police officers and create a fake video?

My guess is the footage was taken whilst shooting his first BGO Entertainment commercial with Verne Troyer.

Just finished shooting a commercial for BGO with @vernetroyer… pic.twitter.com/CvBsqAjVP6

BGO signed Bilzerian to work alongside Troyer in a £15m marketing campaign, that will be an adaptation of the ‘I’m the Boss at BGO.com!’ adverts that Troyer filmed last year.

So where did Dan Bilzerian get all of his money?

If you believe the man himself then a large proportion of it has come through gambling. In a recent interview with Howard Stern, Bilzerian said he had won $50m, this year alone, playing home games against fish businessman.

But the more sensible answer is he got it from his dad.

Paul Bilzerian has also been in the news this week after the Securities and Exchange Commission (SEC) decided to call time on their unsuccessful attempts to collect a $62 million civil judgment against him for securities fraud.

It’s believed the SEC has spent the past two decades collecting just $3.7 million of that haul, and spent $8.6 million in their efforts to collect.

Nice work guys, it’s little wonder you are giving up.

“Do you think I am stupid enough to have a bank account,” Bilzerian told The Wall Street Journal.

Bilzerian served in Vietnam before graduating from Stanford University and Harvard Business School. In 1988, he faced federal criminal charges relating to his corporate takeovers and was convicted of fraud, conspiracy and making false statements to the SEC. He was hit with a $1.5m fine, and handed a four years prison sentence of which he served 13 months.

During a private suit in 1989, Bilzerian estimated his net worth to be in the region of $81.4 million, but also commented that at times he has earned hundreds of millions of dollars.

So how did Bilzerian manage to hide his wealth from the SEC? Check out the footwork in this video and you’ll get a good impression of the way the man operates.