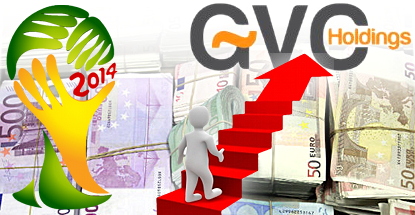 UK-listed online gambling operator GVC Holdings has released a Q3 trading update in which the company described the 2014 FIFA World Cup as “a complete success on all fronts: customer acquisition / sports margin / proved system capabilities and stability.” GVC says Q3 trading through September 18 is up 20% over the same period last year, allowing the company to humble-brag about five consecutive quarters of growth.

GVC’s B2B revenue in Q3 to Sept. 18 was up 12% to €173k per day, despite a 2% drop in sportsbook revenue, which the company blamed on unfavorable Turkish lira exchange rates and “volatile high-rollers” pushing margins down 0.7 points to 11.7%. But B2B gaming helped save the day, rising 46% to €67k per day.

Mobile revenue accounted for €147k per day, up a healthy 253% year-on-year. Mobile still accounts for just 22% of overall sportsbook revenue, well behind some of GVC’s competitors, but again, that’s up from a mere 8% a year ago. A CasinoClub mobile launch is planned for Q1 2015.

GVC’s maximum number of concurrent in-play markets more than doubled year-on-year to 3,564 in August and that number has since risen to 4,102 by Sept. 18. In-play currently accounts for around 70% of GVC’s sports wagers and the plan is to introduce more live streaming into more markets to capitalize on in-play’s popularity.

Looking ahead, GVC is currently recruiting team members ahead of its expected 2015 launch into Asian markets. GVC has already secured a gaming license in the Philippines. GVC is also planning on making further inroads into Spanish-speaking markets via partnerships to be announced in Q4 2014.

GVC cautioned that future reports will suffer in the absence of the World Cup, which could cut earnings by €2m. The imposition in December of the UK’s new 15% point-of-consumption tax will also take a bite out of earnings (an estimated €1.5m had it been applied as of Jan. 1, 2014). But GVC is counting on the expanded customer base it garnered via the World Cup to help offset these shortfalls.