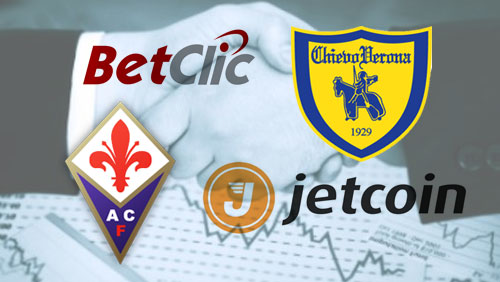 Italian Serie A outfit ACF Fiorentina has come to an agreement with sports betting and gaming company Betclic to become one of the team’s main sponsors. Financial details of the deal were not disclosed but the partnership does give Betclic its own space in Fiorentina’s kits on top of stadium branding at the team’s home, Stadio Artemio Franchi. The deal also includes joint social and digital media initiatives between the two sides.

“We are proud to be a partner of a team rich in history and success like Fiorentina”, Betclic Director General Francesco Postiglione said in a statement. “We are equally certain that, thanks to the support of all the team and its fans, we will be able to establish a new model of sponsorship, which insists on the involvement of more and more fan interaction.”

Betclic is the latest company to hit up a sponsorship deal with Fiorentina, joining kit supplier Joma, Sky Italia and its main partner Save the Children.

The sponsorship deal with Chievo gives Jetcoin an important in-road into the world of top-flight Italian football. More importantly, the Italian Series A outfit has become the first professional association football team to be sponsored by a digital currency.

Chievo and Fiorentina are currently ranked 11th and 16 in the Serie A table, respectively. Chievo isn’t expected to do anything this season other than remain as a mid-table team.  On the other hand, Fiorentina’s considered as one of the league’s dark horse teams and could challenge for a Champions League birth next season. The Viola are also a part of this season’s Europa League, the continent’s second-tier club championship next to the Champions League.

How Serie A might be the closest title race in Europe this season
Paul Seaton
1 November 2019
.