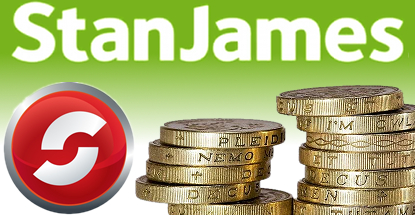 Liverpool-based football pools betting and racing operator Sportech has been ordered to repay the £93m in received from the UK taxman just three months ago. Several years back, Sportech had filed to reclaim some £40m in value added tax (VAT) its Littlewoods subsidiary had (allegedly) mistakenly paid Her Majesty’s Revenue and Customs (HMRC) for 17 years worth of Spot The Ball game revenue. The taxman disagreed, the two sides lawyered up and the courts eventually awarded Sportech the full amount plus interest.

But HMRC appealed that ruling and Sportech revealed this week that the Upper Tribunal (Tax and Chancery Chamber) had ruled in favor of HMRC. Worse, since HMRC had since been ordered to pay Sportech an additional £3m, Sportech now owes the taxman £96m. Sportech, whose shares fell nearly a quarter on the news, has until October 15 to decide whether to appeal.

SO IS STAN JAMES FOR SALE OR NOT?
Meanwhile, UK bookmakers Stan James have partially refuted a report by eGaming Review that the company was slashing staff at its Gibraltar offices (as in making them redundant, not cutting their flesh with razors). eGR said the redundancies reflected management’s desire to sell the company before the Dec. 1 imposition of the UK’s new 15% point of consumption tax (POCT). eGR called the POCT a ‘key driver’ behind management’s desire to sell out, with a Malta-licensed operator said to be close to inking a deal.

eGR reported that Stan James was cutting its entire product development team but CEO Denis Kelly called this claim “not accurate.” Reveiwed-Casinos.com quoted Kelly saying the product development team had been reduced “by four, with the expectation to open up two more appropriate vacancies presently.” Kelly said it would be “madness to suggest there wasn’t a price point ‘somewhere’” but maintained that “there is no ‘for sale’ sign outside the door and we intend to face any challenges presented by the [POCT] head on while we continue to grow the brand.”