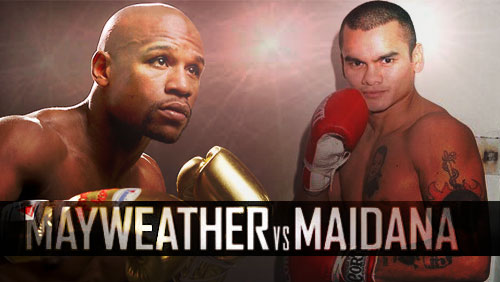 Floyd Mayweather, Jr. is a big draw in boxing. Heck, he might even be the biggest draw in the history of the sport. However, none of that has stopped the public from dropping loads of money on Marcos Maidana ahead of their rematch this weekend. Sure, those 5/1 odds on a Maidana upset are pretty juicy but the accompanying risk is readily apparent. Floyd’s never lost a fight, which means that each and every person to have bet on him to lose in his past 46 fights have all walked home empty-handed.

The pound-for-pound king is a 1/8 favorite. Money’s about the surest thing in sports these days. Put the money down on him and you’re going to win. You’re not going to win a lot, unless you bet big but you’re still going to win. That’s where all the sharp money goes too, albeit with the caveat of waiting until the last possible minute to maximize the value of his odds.

Right now, money’s pouring in on Maidana because of the huge underdog odds attached to him. At some point in the next few days, online sportsbooks will have a lot of risk on one side that might compel them to lower their odds on Floyd to, at least, even out the action. That’s the time sharps are likely to pounce because there’s better value there.

Fight odds in boxing aren’t limited to those who win and who lose. If the odds on a winner aren’t appealing as they are now, bettors also have a choice of eschewing those in favor of props like “Method of Victory”. A decision or technical decision win by Floyd is the overwhelming favorite at 20/53 odds but there’s value in a KO, TKO or disqualification win for Money May at 7/2 odds. Any method of victory attached to Maidana understandably has long odds, beginning with a KO, TKO or disqualification at 7/1 and a decision or technical decision win at 10/1. Oh, and in case anybody’s thinking that the fight is ending in a draw, good luck scoring on those 22/1 odds.

I’d tell you to be prudent and wait for Mayweather’s odds to drop before betting on the fight. But you can also be more prudent and just enjoy the fight, maybe put down a little on a Floyd stoppage at 7/2 odds.