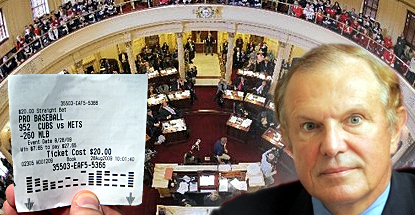 New Jersey state Sen. Ray Lesniak (pictured) says he’ll introduce a new sports betting bill next week to “explicitly abolish” any legislative language prohibiting Atlantic City casinos and state racetracks from taking sports wagers. Lesniak authored a similar bill earlier this year, only to see it vetoed last month by Gov. Chris Christie, who did an about face on Monday by telling tracks and casinos they were clear to begin taking sports wagers just as soon as their infrastructure was ready.

The directive issued on Monday by state Attorney General John Hoffman argued that the original legislation Christie signed back in 2012 had effectively repealed state prohibitions against sports betting, provided such activity took place at a track or AC gaming joint. That view has yet to be confirmed by US District Judge Michael Shipp, who issued an injunction against New Jersey’s sports betting plans in February 2013. Shipp has set an Oct. 6 date to consider whether the state’s latest legal gambit is compatible with the 1992 PASPA federal sports betting prohibition.

Lesniak says the intent behind his as yet unseen sports betting bill is to “shore up” the state’s case by eliminating any lingering legislative text prohibiting sports betting activity at approved facilities. Lesniak told PolitickerNJ.com that Hoffman’s legal motion is asking Shipp “to parse my previous legislation, which [the court] shot down by saying it implicitly repealed” the state’s sports betting prohibition.

Lesniak’s new bill would “specifically abolish language on the books that prevents sports betting.” This will give Hoffman’s motion “more authority and will help withstand any challenges” by the Department of Justice or the pro and college sports leagues.

Lesniak says he has bipartisan support in the legislature for his new bill, which he believes Christie will sign this time around. Lesniak expects the bill to reach the governor’s desk by the end of September, in time to beat Shipp’s day of decision.

MONMOUTH PARK TO DELAY SPORTSBOOK LAUNCH BY 45 DAYS
It remains to be seen if any firmer legal footing will be enough to convince the state’s eligible bookies to actually take wagers. To date, only the operators of Monmouth Park Racetrack have suggested they’ll launch a sportsbook, although Monmouth’s designated sportsbook provider William Hill has been less emphatic and casino operators like Caesars Entertainment have expressly ruled out launching any sports betting operations absent some explicit authorization from the federal government.

On Wednesday, Monmouth operator Dennis Drazin said the track would wait 45 days before launching its sportbook, leaving sufficient room for Shipp to make his decision. Drazin said the decision had been made following a talk with Hoffman. However, Drazin vowed that it was his “intent to start sports betting on the 46th day, unless a judge tells me I can’t.” Drazin said William Hill US had told him the track needed to hire 110 employees and install new internet lines and other infrastructure improvements in order to be ready when that 46th day rolls around.