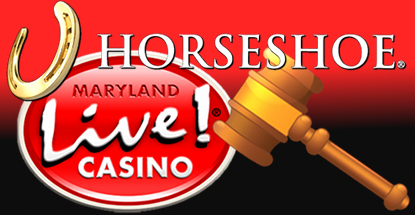 The recent opening of Maryland’s fifth casino pushed the state’s monthly gaming revenue up over $80m for the first time. Horseshoe Casino Baltimore, run by a consortium led by Caesars Entertainment, was only open for five days in August but it earned $5.7m during that stretch. The extra bounty helped the state’s overall casino gaming revenue reach $80.6m, beating the previous monthly record of $77.8m set this March. Had the Shoe not opened, the state’s other four casinos would still have beaten last August’s tally by 5.4%.

Maryland Live!, the state’s current market leader, saw revenue rise 7.4% year-on-year to $57.3m. Analysts have projected the casino could see overall revenue decline by a fifth thanks to the new competition but the full impact won’t be known until the Shoe turns in a full month’s earnings. The Shoe has already eclipsed the $4.2m earned last month by the Rocky Gap Casino Resort and nearly beat Ocean Downs’ $5.9m. Hollywood Casino Perryville declined 4.2% year-on-year to $7.3m.

Meanwhile, Maryland Live! has won a preliminary injunction against the former VIP hostess who took the casino’s list of high-rolling gamblers with her when she took a new job at the Shoe. Maryland Live! had accused Helena Wong of using the proprietary list to contact high-rollers and invite them to gamble at the Shoe, an action that Maryland Live! claimed would cause them irreparable harm.

In a proceeding last Friday in US District Court, Maryland Live! senior VP of marketing Mario Maesano testified that the value of Wong’s list was in the “hundreds of millions of dollars.” The court was told that Wong had emailed 19 of the estimated 1,000 names on the purloined list but Wong claimed she had contacted these individuals based on her own memory and a ‘book’ of information she kept detailing her interactions with high-rollers.

The issue of who owns the information Wong used to contact the 19 whales has yet to be decided, but Judge Marvin Garbis approved the preliminary injunction preventing Wong from using the Maryland Live! list to contact any more whales. Garbis also ordered Wong’s ‘book’ kept in escrow while the lawsuit winds its way through the courts. The Shoe, while not named as a party in the lawsuit, will also be prevented from using Wong’s list to lure gambling whales into the range of their harpoons.

However, Garbis allowed for the possibility that gamblers on the Maryland Live! list might reach out to Wong on their own initiative. Garbis also left the door open for the Shoe to lure these whales using other methods. The Baltimore Business Journal quoted Garbis saying that if the Shoe’s operators “want to put up a billboard outside, ‘Welcome to former Maryland Live! customers,’ they can do that.”