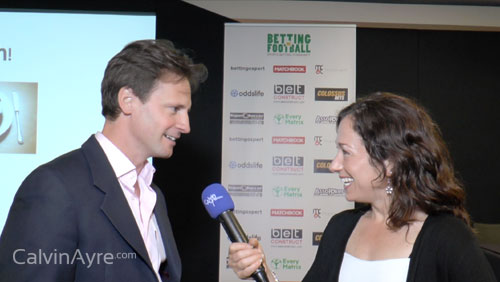 Becky Liggero talks to Mark Davies, Founder of Camberton Communications and he shares what he thinks will be the potential impact on the sponsorship landscape in the UK if there are new laws passed with regards to licensing.

Becky Liggero: I am here with Mark Davies. He is the founder of Camberton Communications and as point at sense of history in the online gambling industry, one of the originals guys at Betfair; he was instrumental in the sale of the Tote to Betfred and he’s with me today.

Becky Liggero: What do you think will happen with the sponsorship landscape here in the UK if there are new laws passed with licensing that we were discussing here today.

Mark Davies: there is a big issue laying potentially in the horizon of Sports. There are some companies who put a lot of money on sponsorship and advertising here who don’t actually to target UK customers. They’re here to target the Asian market and to primarily be the enormous brand it is, allows them to get to Asian market through sponsorship. So they are asked to get a license as if they were targeting British market. They might say that they don’t want to jump through the registry hoop required in order to place an advert to target customers from different country and the impact is they will pull out sponsorship and that is potentially commercially damaging for sports, particularly football. So I think it’s an obvious area where betting and football should be getting together and looking at what the potential impact of the licensing and what is the common ground they have.

Becky Liggero: I know that you have an extensive background in the sports world. So tell me how did you get involved with the sale of Tote with Betfred?

Mark Davies: Well I left Betfair in June 2010 and I set up Camberton, which is an advisory business. It does strategy advisory and public affair and public relations advice. And when the Tote came up for sale, Betfred decided to bid freeze and they were advised by the financial advisers that they needed somebody who could help them navigate the very political environment that they’re going to have to deal with. So I have a friend who called me up saying, will you come and talk to Fred and he like to get you on board. My god! I can’t believe that it was sold to me but he did. I helped him out and he won.

Becky Liggero: I’ve read of some of your blog posted about that whole sale and that was interesting. A lot of people read your blog, apparently. And I wonder, what tricks do you have up of your sleeve to get so many people to follow what you write?

Mark Davies: I did not have any tricks. You just write and see what and where people come on and enjoy what you’re saying and enjoy the way you’re writing it and come along and read it. And the Tote thing, it was actually a very useful tool because it allows us to put out some messages we thought were very important about other people’s bid. Which we could not get the mainstream media to cover because it was too neesh of a topic for them to get involve with in any great length.

Becky Liggero: And I love how people comment. Even though it is a negative comment on the oracle that you’ve written, you’ve always respond back and it generates some amazing conversation.

Mark Davies: Maybe to avoid monopoly of knowledge. I put out ideas and people come back they’re cutting as wrong for this reason and that’s the debate to be had. I love to hear contrary views.

Becky Liggero: Thank you very much!