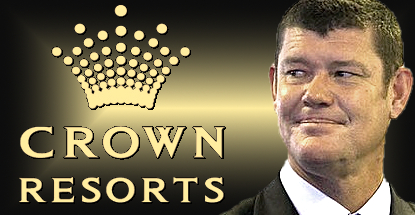 Australian billionaire James Packer (pictured) is smiling broadly after his casino firm Crown Resorts reported a 35% gain in profit during its most recent fiscal year. Normalized profit – calculated by smoothing out the wild volatility associated with VIP gambling – in the 12 months ending June 30 hit AUD 640m (US $595m), of which $291.2m came via Crown’s one-third stake in the Melco Crown Entertainment (MCE) joint venture. MCE’s contribution was up 91.2% year-on-year, reflecting its (until recently) boffo performance in Macau.

By comparison, normalized revenue at Crown’s domestic operations was up a mere 1.4% to $2.8b. While main floor gaming revenue was also up 1.4% to $1.5b, VIP turnover fell 1.5% to $49.9b. Normalized earnings from Aussie operations rose 2% to $803.4m. Crown CEO Rowen Craigie called the FY14 results “satisfactory” given “weak consumer sentiment” in Perth and Melbourne as the local economies continue to experience “structural and cyclical challenges.”

Crown’s 50% stake in the online betting operations of Betfair Australasia generated a net loss of $3.4m for the year. A day earlier, Crown announced it had paid $10m to buy Betfair’s share of the joint venture, so barring any dramatic turnaround in fortunes, next year’s losses will be all Crown’s.

Crown’s report also acknowledged the $22.5m stake it had acquired in Caesars Growth Partners, which includes the social gaming and real-money online gambling operations of Caesars interactive Entertainment, but Crown declined to share what gains or losses may have been generated via this investment.

Crown said it did not recognize any earnings or receive any profits via its share of the UK-based Aspers Group casino operations, but revealed that the total debt owed to Crown from this relationship was £71.4m as of June 30.

Crown said the capital structure of its new Las Vegas joint venture had yet to be finalized, but Crown expects to have majority ownership. The project on the former site of the New Frontier casino has an estimated budget of between US $1.6b and $1.9b, of which Crown’s total equity investment will range from $400m to $500m.