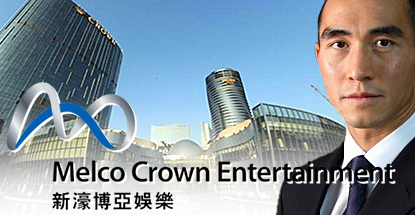 Casino operator Melco Crown Entertainment (MCE) reported a rare revenue decline in the second quarter of 2014, as the absence of VIPs from Macau gaming tables continued to ripple through the industry. For the three months ending June 30, MCE revenue fell 7% to $1.2b, while earnings fell 11% to $313.6m and profit fell by one-fifth to $143.6m. Searching for the silver lining, MCE CEO Lawrence Ho (pictured) chose to highlight the rise in mass market gaming revenue at the company’s flagship City of Dreams property.

The Mocha Clubs slots parlors saw revenue decline 2% to $36.5m while earnings fell 11% to $8.6m. The slim revenue decline is impressive given the number of gaming machines in operation during the quarter fell 40% year-on-year to 1,200, but average win per machine per day rose 60% to $331. Since Q2 2013, four Mocha Clubs outlets have closed while two new ones opened.

MCE says its City of Dreams Manila property in the Philippines is on track to open in Q4 2014 and the Studio City project in Macau will open in mid-2015. MCE also announced a $500m stock repurchase program to complement its ordinary dividend policy.

On the post-earnings call with analysts, Ho reflected on the “perfect storm” of factors weighing down the Chinese VIP gambler market, but said numbers through July and early August were improving and predicted that the current downturn would be nothing but a dim memory in a year’s time.

Ho also addressed the kerfuffle involving MCE’s branch office in Taiwan. On Thursday, MCE learned the Taipei District Prosecutors Office had indicted MCE’s Taiwan branch and some of its employees over alleged violations of banking and foreign exchange laws. Ho said the company had yet to receive the formal indictment document but MCE’s Taiwanese legal team had informed MCE’ that its Taiwan operations were above aboard. As such, MCE intends to “vigorously defend” itself against these charges. Ho said the legal brouhaha wouldn’t have any immediate material impact on MCE’s operations.