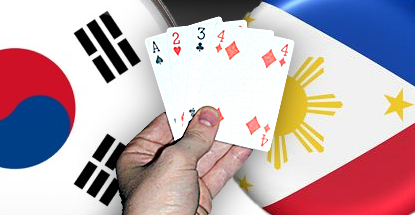 South Korean authorities have broken up an online gambling website believed to have handled up to KRW 400b (US $387m) in wagers in a little over two years of operation. The Korea Herald quoted police saying the operation, which focused on the Badugi poker variant popular in the country, launched in March 2012 before police shut it down in May of this year. The site operators are believed to have profited as much as KRW 40b before the whip came down.

Arrest warrants have been issued for three alleged gang members, including the alleged leader with the surname Yang. Another 26 members of five separate gangs were arrested for acting as agents and/or managers of the shops in which the illegal activity was conducted. A further 11 individuals were arrested for gambling via the site. The site’s server was based in China, which is also home to the site owner, another former gang member.

The bust marks a break of sorts with tradition, as most South Korean-facing operations tend to be based abroad. The Philippines, in particular, has seen its share of South Korean nationals operating betting sites targeting their home and native land. Last month, four more Korean nationals were arrested for running a suspected online gambling site out of a house they were renting in Angeles City.

The Philippines hosts a thriving base of international operators licensed by the First Cagayan Leisure and Resort Corporation in the Cagayan Economic Zone Authority but the country’s appeal for small-time operators likely stems from the legal limbo in which online gambling currently resides. In 2012, the Philippine Court of Appeals ruled that online gambling wasn’t a punishable offense under Presidential Decree No. 1602, the nation’s anti-gambling law. As a result, while many of the foreign nationals arrested for online gambling offenses over the past two years have been convicted on non-gambling charges or deported to their home countries, none have been convicted of online gambling charges in a Philippine court.

In July, former Criminal Investigation and Detection Group chief and current member of the House of Representatives Samuel Pagdilao Jr. introduced legislation to clarify the anti-gambling laws. However, as a member of the opposition ACT-CIS party, there’s no guarantee Pagdilao’s legislation will become law. As such, the Philippines will likely continue to attract small-time ‘illegal’ operators for the foreseeable future.