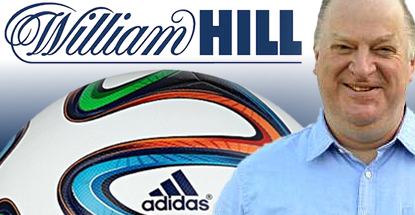 UK bookies William Hill saw revenue rsie 7% to £805.2m in the first six months of 2014 but operating profit fell 2% to £176.9m and after-tax profits dipped 26% to £98.5m. The company blamed most of the downturn on “customer-friendly” sports betting results, particularly in the first quarter. Hills’ shares fell nearly 3% on Friday to close at 343p.

Friday marked the first day on the job for Hills’ new CEO James Henderson (pictured), who said he was “proud” to have accepted the reins from outgoing CEO Ralph Topping, who is leaving after 44 years with the firm. Henderson, himself a 29-year Hills’ veteran, described his vision of Hills’ future as a “multi-channel” operator with a “focused but internationally orientated gambling group.”

The first half of the 2014 FIFA World Cup reported “record-breaking” turnover of £172.5m, up 211% over the sum wagered with Hills on the 2010 tournament, while gross win came to £27.8m. For the World Cup as a whole, wagering rose 80% to £208m, with the decreased momentum in the second half in part reflecting the early exit of the English side.

Retail operating profit fell 7% to £100.3m. OTC betting handle rose 2% but margin fell 1.7 points, dragging betting revenue down 7% to £231m. Retail gaming revenue gained 7% to £232m as win per machine per week rose £21 to £931. Hills says the retail profit decline would have been worse minus “effective cost control” measures, including more use of ‘single manning’ during evening hours “where appropriate.”

Hills operated an average of 2,436 betting shops during H1, 2% higher than H1 2013. Hills has since shed 70 shops as part of a previously announced plan to close 109 shops after the UK government boosted the machine games duty on fixed-odds betting terminals from 20% to 25% effective March 1, 2015.

William Hill Australia accounted for 7% of group revenue in H1, with revenue rising 7% to £54.8m and profits nearly doubling to £5.4m on a pro-forma constant currency basis. Factoring in the recent additions to Hills’ down-under portfolio, revenue was up 91% to £58.9m while profit rose 184% to £10.5m. Hills combined Aussie operations reported unique active users rising 21%, new accounts improving by 14% and cost per acquisition declining 36%.

In Italy, Hills’ online revenue rose 44%, with mobile generating 21% of revenue. In Spain, online revenue rose 10% with mobile’s share at 46%. Despite the improvements, these two markets reported a combined operating loss of £2.8m in H1. All told, Hills’ international markets – Australia, Italy, Spain and the US – contributed 17% of Hills’ operating profits.

The William Hill US division reported handle rising 22%, revenue up 27% to £12.2m and profit improving nearly four-fold to £2.9m. Hills noted that New Jersey is currently exploring whether to repeal its prohibitions against sports betting, something Hills would expect to capitalize on due to its existing sports betting technology deal with the state’s Monmouth Park racetrack.