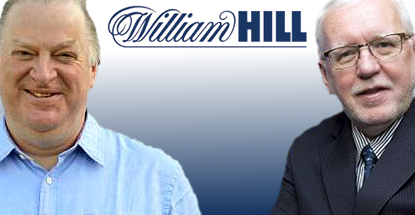 UK bookies William Hill are poised to announce their selection to replace outgoing CEO Ralph Topping (pictured far right). On Saturday, This Is Money reported that James Henderson (pictured near right), a 29-year Hills veteran and its current director of operations, has been tipped to lead the iconic UK bookmaker into the future. Henderson is currently minding Hills’ Australian operations following last month’s ouster of former Sportingbet Australia CEO Michael Sullivan. Topping, who started his four-decade-long Hills career as a betting shop clerk, has been CEO since 2007.

This Is Money claimed Henderson would assume the top spot on Hills’ totem pole later this year. Last May, Hills said Topping would remain at the company’s helm until the end of 2015 while Hills searched for a suitable replacement. This February, the Times reported that Topping was looking to ride off into the sunset ahead of schedule. A Hills spokesman insisted Topping was “committed” to sticking to the original timeline but Hills’ board had “prudently” decided to accelerate its candidate vetting process.

Last May, Hills said its “preference is always to look internally first for candidates” although it copped to “continuing to scan the external market” to ensure it had a full range of options. Despite tasking recruitment firm Zygos with scouring the globe for suitable candidates, This Is Money suggested Hills’ search for an external replacement had failed to turn up any likely lads (or lasses).

Henderson’s alleged ascension comes at a difficult time for UK bookmakers. In addition to the looming imposition of the 15% online gambling point of consumption tax set to kick in this December, retail operations are struggling to adjust to increased taxes on fixed-odds betting terminals and tighter restrictions on where new betting shops can be opened. Concerns over the effects on future earnings contributed to Hills being targeted this week for relegation from the FTSE 100 after underperforming the index by 22% over the past 12 months. So did Henderson take one step forward, or did everyone else take one step back?