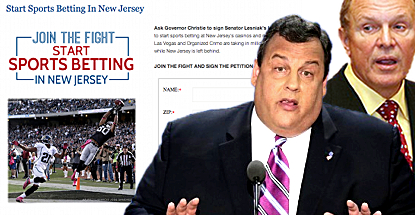 New Jersey state Sen. Ray Lesniak (pictured far right) has launched an online petition to help convince Gov. Chris Christie (in the foreground) to sign the state’s new sports betting legislation into law. Christie has until Aug. 10 to render judgment on the bill, which passed both state legislative bodies by veto-proof margins.

Lesniak introduced the legislation, which would authorize sports betting at state racetracks and Atlantic City casinos, within hours of the US Supreme Court declining to hear New Jersey’s appeal of lower court rulings blocking the state’s previous sports betting legislation.

Earlier this month, Christie told reporters he hadn’t made any decision on the bill, but promised he “won’t be shy” when his mind’s made up. Lesniak’s petition (viewable here) asks New Jersey residents to “join the fight” by telling Christie they support the new legislation and expect their governor to do likewise. The petition warns that New Jersey is being “left behind” while those nefarious bookies in Nevada and ‘organized crime’ gangs are being raptured up into sports betting heaven as we speak.

As luck would have it, two of those organized criminals were in a federal court in Newark on Tuesday, pleading guilty to illegal sports betting via the BetEagle.com site. The Costa Rica-based credit betting site’s owner, 77-year-old Joseph Graziano, pled guilty to racketeering conspiracy and agreed to a fine of $1m. Also pleading guilty was Graziano’s 44-year-old underling Dominck Barone, who was fined $100k. Graziano’s prison sentence will be determined on Nov. 18 while Barone learns his fate on Nov. 12. Each man is facing up to 20 years in stripes.

Graziano and Barone were responsible for the password-protected site’s daily operations but overseeing the business was 80-year-old Joseph Lascala, a made member of the Genovese crime family.

On Wednesday, three other defendants in the same case entered their own guilty pleas. Mark Sanzo, Robert Scerbo and William Bruder all told US District Judge Clair Cecchi they were guilty of racketeering conspiracy, for which they will be sentenced in a couple months. Four of the nine other defendants in this case have already pled guilty.