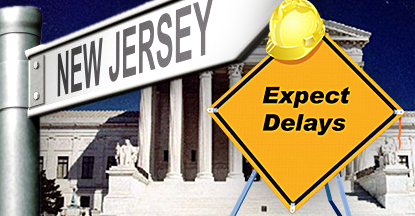 A federal court in Newark has sentenced New Jersey resident Kenny Baran to six months of house arrest for his involvement in an illegal online gambling operation. Baran was one of 14 individuals charged in May 2012 in connection with a credit betting operation linked to the Genovese crime family. Baran pled guilty in September to transmission of wagering information via Beteagle.com, which served bettors across northern New Jersey. Baran, who was also fined $2k, originally faced a maximum penalty of two years in prison and a $250k fine, so you don’t hear him complaining.

Baran’s ankle bracelet may come off by the time New Jersey learns whether the US Supreme Court will consider its appeal of a federal court injunction preventing the state from offering Nevada-style single-game sports betting. New Jersey filed its paperwork with the Court in February and the state’s legal opponents – the Department of Justice and a gaggle of sports leagues – were supposed to file their response by March 17.

That date has since been extended to April 21 following a request for more time by the Justice/League combo (not to be confused with DC Comics heroes the Justice League, although some of the sports leagues’ legal arguments are quite comical). The state will have a further 10 days to file a reply brief, which pushes the matter into May.

Those 45 extra days may produce an even larger delay for New Jersey. As attorney Daniel L. Wallach noted on the Kozongaming blog, the Court’s current term ends in late June. With less than two months to go on the judicial calendar, Wallach doesn’t see the Court having the time to deal with the expected host of amicus filings from likeminded states and other interested parties. Koz believes the delay may actually be to New Jersey’s benefit, suggesting that the summer recess would allow Court clerks sufficient time to ponder the complexities of the legal arguments at hand. The Court’s next term doesn’t get underway until Sept. 29.