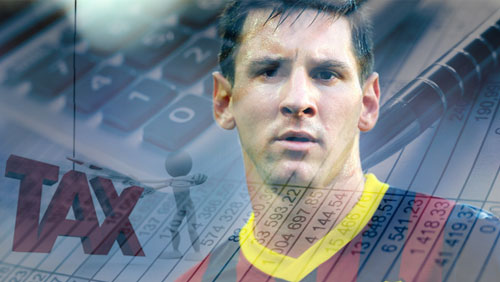 It’s been a rough month for Lionel Messi. July could have been a lot better for the man considered as the world’s best football player. He could

have spent it hawking facial exercise machines like his main foil, Cristiano Ronaldo, did in Japan recently.

Unfortunately, Messi will forever remember July 2014 as the month he and Argentinian teammates lost in the World Cup finals to Germany and following that up by finding out he will face tax fraud allegations back in Spain.

This kind of headline is not what you typically associate with Lionel Messi. By all accounts, the man is a saint on and off the pitch. He does not engage in the kind of diving theatrics his peers Ronaldo and Arjen Robben are often accused of.

More importantly, he is arguably the most low-key sports icon in the world today, rarely making waves that compel the media to splash his name in the tabloids. His personality is the antithesis of Ronaldo, his flamboyant rival who has never seen a hair product he did not pick up and smell.

And yet here he is, the subject of an investigation that has far more important repercussions than losing a football tournament, even one as big as the World Cup.

To be fair, Messi has actually been in this position before, specifically in 2006 and 2009 when similar tax evasion cases arose. However, Messi was found innocent both times and so the cases were eventually dropped.

However, this time, it is different. Spanish tax authorities are going after him and his father, Jorge, for allegedly skipping out on paying tax payments from his image rights by creating what the Guardian described as a web of shell companies.

A Spanish tax judge made the ruling despite recommendations made by the public prosecutor to drop the charges against the Argentine star after his father paid €5 million in back taxes or equal to the alleged unpaid tax plus interest.

Despite the prosecutor’s recommendations, the judge’s office released a statement saying, “There is sufficient evidence to suggest that he [Messi] could have known about and consented to the creation and maintaining of a fictitious financial structure.”

This is the kind of problem which Messi will have a difficult time running away from, especially if the phrase sufficient evidence really does have some weight to it. Numerous reports suggest that documents pertaining to these ghost companies had Messi’s signature on them, suggesting that he was aware of the transactions as they were happening.

Tax issues are no joke, no matter where you live. Just ask Manny Pacquiao, who has had to deal with his own tax problems in the Philippines. Messi and his father could spend six years in prison on top of paying $32 million in fines.

That is a far steeper penalty than losing the World Cup final to Germany.

UFC 250 Odds: Roundup of the Rest of the Card
Dan Taylor
4 hours Ago

Betfair walks away from Japanese racing
Daniel Gardner
5 hours Ago