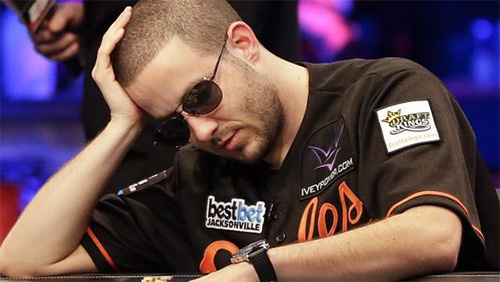 Greg Merson creates an open book policy for his World Series of Poker (WSOP) results, and underlines the points he was trying to make in 140 words on the WPT500 Aria Event.

If you are a fan of Greg Merson then I suggest you stay tuned to his new Facebook page, because it’s going to be an interesting one.

When you ask Greg a question, you get an answer. No ducking. No diving. No dodging.

Following in the footsteps of Daniel Negreanu, the former World Champion, decided to have an open book policy on his financial results at this years WSOP, and it makes for some interesting reading.

Merson started the series as well as anyone. He picked up a 15th place finish at the WSOPC National Championships in Atlantic City, before cashing in 14th, 99th and 13th in some of the first WSOP events of the summer.

Then the graph started to line south and Merson would not cash in another tournament all summer to end with a record of 4/23; a result that Merson is more than fine with.

“I go into every summer hoping to have one shot at a bracelet and I had three, so I was very happy with how the tournaments went (even with losing around 100K or so in them),” Merson stated on Facebook.

Merson more than made up for it in the cash games where he said that he won a bit over $100K. Interestingly, he said the majority of those dollars came playing online cash games, which means the action on WSOP.com must have gotten pretty high during the summer.

He played five live cash game sessions in all, including a 200/400 NL game with, Doug, Marchese, Prahlad and Jungle. Merson said he decided to play the event to warm up for the One Drop but recognized that he was not a favorite in that small field.

“I felt rusty and burnt out during the session and quit a small winner after three hours. I think I got owned in the small sample but managed to cooler Doug in a 70K pot early on. I was definitely the worst player in that lineup but its important to challenge yourself in games sometimes to improve and use those skills to raise your expectation in other spots,” Merson wrote.

Merson’s fortunes didn’t continue in the One Drop event, but he seemed to be over the moon about the experience.

“My One Drop experience was amazing and I would do it all over again if I had the chance. The value wasn’t as great as I would have hoped but it was such a great opportunity for me and I am blessed to be able to say I played a million dollar tournament.”

Finally, he was very open about the action that he bought during the series stating he lost over $150,000 buying pieces in cash games and tournaments. In total, Merson was down $128,900 throughout the entire summer (tourneys, cash and buying action), but said he was more than satisfied with the outcome given his successful years in 2012 & 2013.

WPT500 at the Aria: The Greg Merson View

There has been a bit of titillating Twitter talk between Greg Merson, World Poker Tour (WPT) Director Matt Savage and a few other high profile pros over an outburst that Merson made on the social media outlet where he spoke out against the decision by the WPT to hold the WPT500 Series at the Aria whilst the WSOP Main Event was in full swing.

After several 140 word volleys were batted over the net, Merson took the opportunity to underline his points on his new Facebook page.

The main point that he wanted to make was the gratitude that he felt for the WSOP and what it had done, not just for his career but the livelihood of poker in general. He believes that the Main Event is the most important tournament of the year, and said the decision by the WPT to poach players was grimy.

“The main event blew up poker to another level and keeping the numbers strong for the main event is important for the industry as it continues to struggle without federal legalized online poker in the states,” Merson wrote.

He emphasized his point by asking how the WPT would react if the WSOP ran a $500 bracelet event at the same time as the WPT World Championships?

The other point that Merson was keen to emphasize was the need for the big three (EPT, WPT & WSOP) to stop fighting for the same player pool and instead work together to create a holistic poker picture that helps everyone involved in the game.