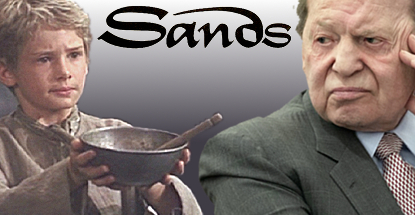 Casino operator Las Vegas Sands posted a profit of $671.4m in the second quarter of 2014, a gain of 27% over the same period last year. But over two-thirds of a billion dollars was below analysts’ estimates, as was the apparently paltry 11.8% increase in Q2 revenue to $3.62b. Fickle investors responded with alarm, pushing the stock down 2% in after-hours trading. Seriously, Caesars Entertainment should have such problems.

On the post-earnings analyst call, Sands chairman Sheldon ‘yay, dividends’ Adelson was quick to remind everyone that “one month or quarter doesn’t make a trend,” so stop freaking out about one World Cup hiccup already. ‘Nothing is going to change in Macau.” Sands welcomed nearly 17m visits to its Macau properties in the three months ending June 30, which led to a record $801.3m (+21.9%) in adjusted earnings. But analysts were apparently more interested in fretting over the $29m in “14th month” bonuses Sands had given its Macau casino employees, the absence of which would have pushed Sands earnings up three cents per share.

In terms of dramatic movements, the mass market gambling sector owned the headlines. Mass market table drop at Venetian Macao was up 40.2% to $2.2b while VIP rolling chip volume rose a mere 4.2% to $12.3b. However, VIP win rate was a stellar 3.45%, above both the normal range and last year’s figure, while mass win rate fell 2.5 points to 25.7%.

Sands’ properties in Nevada, the Venetian Las Vegas and the Palazzo, reported revenue up 2.1% to $353.1m as table drop fell 20.2% and slots handle eked out a 1.7% gain. Occupancy fell 1.5 points to 90.1%. Sands Bethlehem in Pennsylvania saw net revenue fall 0.6% to $126.1m, thanks mainly to a 3.5% drop in slots volume. To put things in perspective, Sands Bethlehem’s revenue was only $7.8m more than Sands’ Asian retail mall operations brought in.