Home / Poker / What Poker Can Teach us About a Lack of Solidarity? 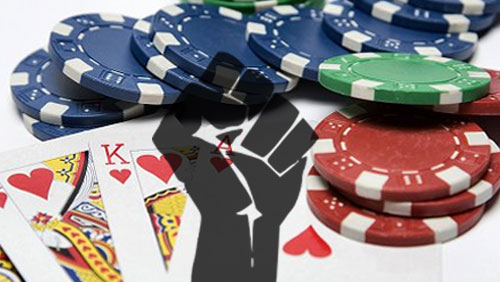 Lee Davy once again goes to print to express his disdain at the poker community’s lack of solidarity when it comes to the fight against Sheldon Adelson.

We haven’t even laced up the gloves.

“Where shall we eat tonight?” I asked my wife.

“What about the Grand Lux Cafe at the Palazzo?” came the reply.

The reply contained a raft of swear words.

My wife now understands why the quite amazing Grand Lux Cafe will never again see the color of my money. I have stayed at the Palazzo for two of my four WSOP tours. On both occasions, I was working for PartyPoker and the Grand Lux Cafe was the place for my regular nightcap.

Not since Sheldon Adelson decided to pick up arms and go to war against the iGaming industry in the USA.

I swear that as long as I work in this industry I will never set foot in a Sheldon Adelson’s property as long as I live.

Will it make a difference?

If you are asking that question then you are missing the point. It’s a point of principle. It’s about values. It’s the way that I was raised. I might have been born in England but I was raised in Welsh Valleys. A place that was heavily affected by the coal mining strikes of the 80s.

People went through incredible difficulties during those times. Children were sent away to special homes because parents couldn’t afford to feed them during the strikes. But they were solid. They showed solidarity. There were unwritten rules. People would not cross that picket line.

There is a picket line at the Palazzo, The Venetian and his properties in Macau. You can’t see it but you know it’s there. That’s why I won’t cross it. To do so would be the height of hypocrisy.

So why doesn’t anybody else care?

The very nature of the game can make you blind. You can’t see anything except your own greed. Solidarity? Don’t make me laugh.

I was going to list the players who attended the recent Deepstack Series at the Venetian but looking through the names it’s easier to name those that didn’t attend.

I am aghast at the variety of people who don’t seem to care—people of all genders, of all ages and from all corners of the globe. There’s a part of me that can excuse those who have online poker in their own countries because they are not directly affected but the Americans? It’s an utter joke. There are even players who are involved in the US online poker industry who have played at the Venetian.

One American who can see the picket line is Mohsin Charania.

It’s not just poker players who are hypocrites either. The organizations are also stinking of it. Take 888 for example. They are the only iGaming organization in the world that has a foothold in all three states. If anybody were going to walk the length of the picket line waving Save iGaming in America flags then it would be 888.

They quite literally slept in the enemy’s bed and paid him for the privilege.

But it’s not just the so-called good guys that are hypocritical by nature. So is the enemy. Sheldon Adelson, and his cronies, were very quick to turf PokerNews out of their poker room, because of their affiliation with iGaming, but when a hoard of online poker qualifiers turn up they take them into their bosom and tell them to suckle away.

There is no fight…and there never will be.

It’s the very nature of poker.

We have become so used to coin flips that we are just sitting back hoping that the cards fall in our favor.

That’s our plan and it’s lazy, lifeless and listless.