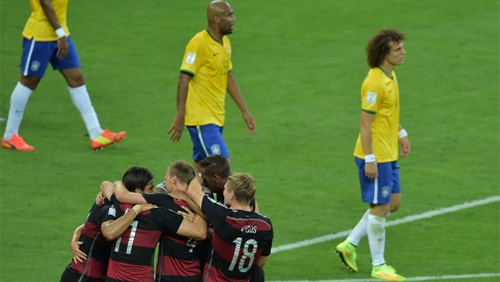 Germany’s visceral pummeling of Brazil in their World Cup semi-finals match didn’t just cause a nation of 200 million to collectively weep and flood the streets with their tears; it also costa handful of UK bookmakers a ton of money.

Things like this happen when a crazy result like a 7-1 trashing occurs. Long odds somehow hit and those nutty enough to have placed bets on them end up looking more like geniuses.

According to Agence France-Presse, that’s exactly what happened to UK books Paddy Power, Ladbrokes and William Hill. All three suffered the wrath of the result, costing them a lot of money on odds that would’ve otherwise been money grabs for them.

Paddy suffered the cruel fate of accepting 82 bets on German winger Toni Kroos scoring two or more goals during the game at 80/1 odds. It only took Kroos less than 30 minutes to turn it into a winning prop, putting the bookmaker into a massive hole that spokesman Josh Powell described as a tougher night than what Brazilian strike Fred had to go through during the embarrassingbeat down.

“There were some stupid-looking punts that look like a stroke of genius now,” Powell said.

Paddy isn’t alone because misery loves company. “All in all, it was a pretty bad night for us,” William Hill spokesman Joe Crilly told AFP. “Germany was incredibly well-backed.”

William Hill had to pay out around £1 million on the Both Teams to Score prop, a huge loss that was only activated when Oscar scored a consolation goal for Brazil in the dying seconds of injury time.

It was one horror story after another for UK bookmakers that were all brought about by one of the most inconceivable World Cup football matches in history.