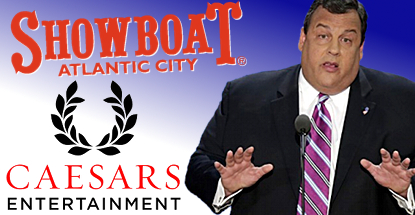 Casino operator Caesars Entertainment says it would consider offers to buy its struggling Showboat property in Atlantic City, depending on how much a prospective bidder was willing to pay. Caesars stuck a dagger into the heart of AC’s flailing casino industry late last month when it announced it would close the Showboat on Aug. 31 due to “persistent declines” in the local market. Caesars now says it would be willing to at least entertain offers from anyone looking to keep the property open, assuming the buyers could pass muster with the state’s gaming regulators.

Caesars CEO Gary Loveman had previously diagnosed AC’s ongoing gaming revenue declines as partly due to an oversupply of casinos, which contributed to Caesars’ decision to shut one of its four AC properties to save the other three. But while spokesman Gary Thompson told the Associated Press that the oversupply issue remained a concern, the predominant factor in what Caesars ultimately chooses to do “would be the amount of money we could receive from the property.” In case you weren’t aware, Caesars is teetering on the brink of default on its industry-high $24b in long-term debt, and every penny counts.

Anyone willing to assume ownership of the Showboat would also have to factor in the possibility that AC may soon have in-state casino competition (in addition to current out-of-state competition in Pennsylvania and future competition in New York). Gov. Chris Christie (pictured) has guaranteed AC’s casino exclusivity until the end of 2015, but other state politicians have been pushing to open casinos in other Garden State cities. On Monday, Christie told reporters he’s now “willing to have that conversation.”

Christie attempted to reassure AC casino operators that any expansion talks would include measures intended to support AC’s thinning herd. Other state pols have identified the Meadowlands, Monmouth Park, Newark, Camden and Jersey City as potential casino hosts, but Christie cautioned that nothing was theoretically off the table. “If you go in with preconceived notions, you don’t really have much of a conversation.” And if you go on building casinos in an oversaturated northeast US market, you don’t really have much of a prayer.