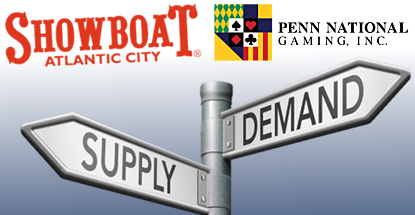 Casino operator Caesars Entertainment has confirmed it will close Atlantic City’s Showboat property on Aug. 31, throwing its 2,100 employees out of work the day before Labor Day. The day after a local union boss broke the story, Caesars issued a statement saying the “difficult” decision was made due to “persistent declines in business levels in the area exacerbated by the high property-tax burden.” Caesars CEO Gary Loveman said the move was “a necessary step to help stabilize our business in Atlantic City and support the viability of our remaining operations in the vicinity.”

The closure reduces Caesars’ AC holdings to three – Caesars, Bally’s and Harrah’s – while reducing AC’s total complement of casinos to ten. Or nine, assuming no white knight steps in to rescue the bankrupt Revel, which has warned it could close by August 18. (Revel’s assets will go up on the auction block on Aug. 6.) Fitch Ratings analysts warned that the Showboat’s closure might not be the last, saying there was still “room for consolidation. People recognize that Atlantic City won’t disappear, but the declines aren’t over yet.”

Spinning faster than an Olympic figure skater, AC’s mayor Don Guardian claimed his city was “still on the move despite this economic hiccup.” While gaming revenue has fallen 40% since 2006, Guardian touted the fact that AC’s non-gaming revenues were on the rise and hotel occupancy was strong. “These are positive trends that have been underappreciated.” Perhaps, but Showboat’s closure has left the future of one non-gaming revenue generator in doubt, as the Showboat was home to AC’s House of Blues concert venue. Caesars has yet to comment on the venue’s future.

Also questioning the regional casino market’s future is Penn National Gaming, which announced on Friday that it had dropped its bid for Philadelphia’s second casino license. Penn National CEO Timothy Wilmott issued a statement saying the “market potential in Philadelphia is less today than when we first applied, as a result of the ongoing gaming saturation in the mid-Atlantic region.” Penn’s withdrawal leaves four remaining bidders: developer Bart Blatstein’s Provence, the Goldenberg Group’s Market8, PHL Local Gaming LLC’s Casino Revolution and the Live! Philadelphia joint bid by Cordish Cos. and Greenwood Gaming.